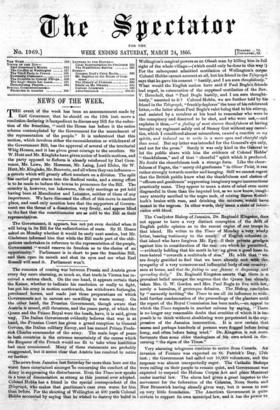 THE event of the week has been an announcement made by Earl Grosvenor, that he should on the 12th inst. move a resolution declaring it inexpedient to discuss any Bill for the reduc- tion of the franchise, " until the House has before it the entire scheme contemplated by the Government for the 'amendment of the representation of the people." It is understood that this motion, which involves either the reconsideration or withdrawal of the Government Bill, has the approval of several of the territorial Whig Houses, and it has given great courage to the seceders. Sir W. Hutt and Mr. Kinglake have given notice of hostile motions, and the party opposed to Reform is already reinforced by Earl Gros- venor, Mr. Lowe, Mr. Horsman, Mr. Laing, Lord Elcho, Sir W. Hutt, Mr. Kin glake, Mr.13ouverie, and all whom they can influence — a ooterie which will greatly affect numbers on a division. The split has carried great alarm into the Radical ranks, and a strong effort is to be made to induce the towns to pronounce for the Bill. The country is, however, too lukewarm, the only meetings as yet held having been at Manchester and Leicester, neither of them of any importance. We have discussed the effect of this move in another place, and need only mention here that the supporters of Govern- ment use the threat of a dissolution very freely, and appear blind to the fact that the constituencies are as cold to the Bill as their representatives.