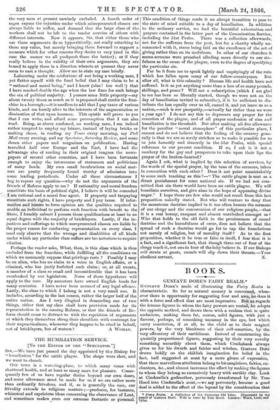 Sin,—We have just passed the day appointed by the Bishop for " humiliation " for the cattle plague. The shops were shut, and we went to church.

Our town is a watering-place, to which many coins with shattered health, and at least as many more for pleasure. Conse- quently few of us have regular duties beyond our own doors, and some allowance must be made for us if we are rather more than ordinarily frivolous, and if, as is generally the case, our frivolity extends to religious matters ;—produces, for instance, whimsical and capricious ideas concerning the observance of Lent, and sometimes makes even our sermons fantastic or personal. This condition of things made it an abrupt transition to pass to the state of mind suitable to a day of humiliation. In addition to the ordinary service, we had the beautiful exhortation and prayers contained in the latter part of the Commination Service, including the 51st Psalm. There was a collection afterwards, not for the sufferers from the pest, but for a charity wholly un- connected with it, stress being laid on the excellence of the act of giving rather than on its usefulness. In other of our churches it seems sermons were preached alluding more directly to our sin- fulness as the cause of the plague, even to the degree of specifying the particular sin.

Far be it from me to speak lightly and unpityingly of the ruin which has fallen upon many of our fellow-countrymen. But after all, what is this calamity ? Human life and health have not suffered. Is it as yet anything more than a loss of so many pounds, shillings, and pence ? Will not a subscription (which I am glad to see has been so liberally started, though we were not on the day of humiliation invited to subscribe), if it be sufficient to dis- tribute the loss equally over us all, cancel it, and yet leave us as a nation,—such is our prosperity,—actually far richer than we were a year ago ? I do not say this to deprecate any prayer for the cessation of the plague, and of all prayer confession of sins and humiliation is the threshold. But after making all due allowance for the peculiar " moral atmosphere" of this particular place, I cannot and do not believe that the feeling of the country gene- rally is that we are so sorely stricken as to make it possible for us to join honestly and sincerely in the 51st Psalm, with special reference to our present condition. If so, I ask is it not a mockery for the gay and prosperous to take upon their lips the prayer of the broken-hearted ?

Again I ask, what is implied by this selection of services, by the words of the special prayer, by the tone of the sermons, taken in connection with each other ? Does it not point unmistakably to some such teaching as this ?—" The cattle plague is sent as a direct punishment for some national sin. If we had not com- mitted that sin there would have been no cattle plague. We will humiliate ourselves, and give alms in the hope of appeasing divine anger." I hope there are few who would not recoil from this last proposition nakedly stated. But who will venture to deny that the monstrous doctrine implied in it too often haunts the sermons of our clergy and the conversation of our religious people,—that it is a real heresy,- rampant and almost unrebuked amongst us ? VVho that holds to the old faith in the preciousness of sound doctrine and the harmfulness of error, does not believe that the spread of such a doctrine would go far to sap the foundations not merely of religion, but of morality itself ? As to the first proposition, whether it be true or false in itself, I fear that it is a fact, and a significant fact, that though three out of four of the clergy teach it, not one in four of the laity believe it. If our Bishops will strain at gnats, camels will slip down their throats.—Your