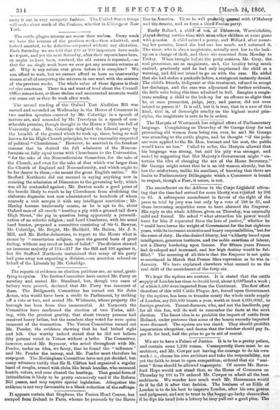 Page 2, 24 March 1866 — Committee have confirmed the election of two Tories, add- for
Close

Committee have confirmed the election of two Tories, add- for

all this fun, will do well to remember the facts at the next ing, with the greatest gravity, that about twenty persons had election. The latest idea, is to prohibit the import of cattle from

received heavy bribes, but the members they voted for were quite Holland, under pretence that some of the beasts recently imported innocent of the transaction. The Totnes Committee turned out were diseased. The squires are too timid. They should prohibit Mr. Fender, the evidence showing that he had bribed right importation altogether, and decree that the butcher should pay 2s. and left. One worthy indeed stated that be did not believe per lb. for beef, half the price to go in aid of rental.

fifty persons voted in Totnes without a bribe. The Committee,

however, seated Mr. Seymour, who acted throughout with Mr. We are to have a Palace of Justice. It is to be a pretty palace, Fender, under an idea, we fancy, that he found the " influence " and contain some 1,100 rooms. Consequently there must be an and Mr. Fender the money, and. Mr. Parader must therefore bis architect, and Mr. Cowper not having the courage to do his own scapegoat. The Nottingham Committee have not yet decided, but work i. e., choose his own architect and take the responsibility, nor many witnesses testify that Sir R. Clifton had organized a regular yet the faith to trust to open competition, ordered that six " emi- band of roughs, armed with clubs like brush handles, who, menaced nent " firma should be allowed toleompete. Of. course Mr. Beres-

hostile voters, and once cleared the hustings. That genial form of ford Hope would not stand that, so the House of Commons on

intimidation is likely to be pretty extensively used if the Reform Thursday by 101 to 70' ordered Mr. Cowper to admit all the best. Bill passes, and may require special legislation. Altogether the architects. We wonder how much work Mr. nausea:lam would