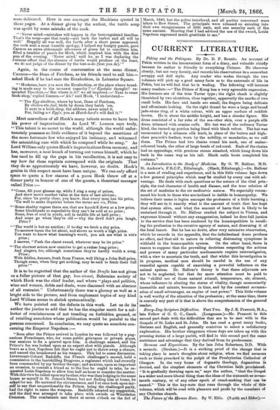 is a man of reading and experience, and in this

a few general principles which may be studied by every one with ad- vantage. He deals with such questions as the nature of the vital prin-

ciple, the real character of health and disease, and the true relation of

the art of medicine to the vie medicatrix natures. We especially recom- mend his book to those who are inclined to dabble in homosopathy. We

believe their name is legion amongst the professors of a little learning ;

they will see in it exactly what is the amount of truth that has kept that system alive, and what the amount of harm that is likely to be

sustained through it. Dr. Balfour studied the subject in Vienna, and expresses himself without any exaggeration, indeed he does full justice to the service that has been rendered by the homceopathists in recall- ing the profession to the curative agency of nature, and disarming it of the fatal lancet. But he has no doubt, after very extensive observation, which he records in the appendix, that the infinitesimal doses produce no effect, and that aid to nature in relieving distressing symptoms is

withheld in the homoeopathic system. On the other hand, there is reason to suppose that the prevailing doctrines respecting the actions

and powers of many particular medicaments require reinvestigation,

with a view to ascertain the truth, and that whilst this investigation is. in progress, medical men should be careful in the use of any

remedial agents capable of exercising a powerful influence on the

animal system. Dr. Balfour's theory is that these adjuvants are not to be neglected, but that far more attention must be paid to

the "skilful use of those natural stimuli, temperature, air, aliment, whose influence in altering the status of vitality, though momentarily insensible and minute, becomes in time, and by the constant accumu- ation of small advantages, an engine of vast power." This little volume is well worthy of the attention of the profession; at the same time, there is scarcely any part of it that is above the comprehension of the general reader.