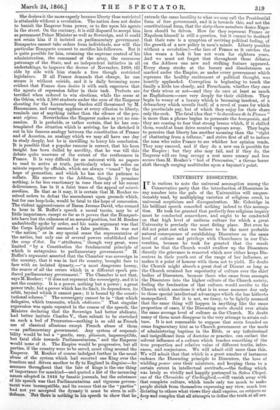 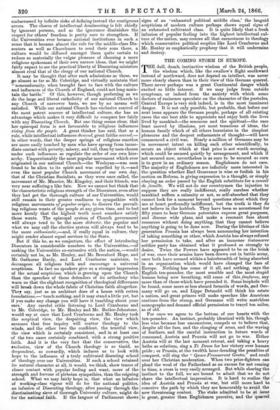 Page 7, 24 March 1866 — embarrassed by infinite risks of defining instead the contiguous errors.
Close

embarrassed by infinite risks of defining instead the contiguous errors.

The charm of intellectual domineering is felt chiefly by ignorant persons, and as the ignorance diminishes the respect for others' freedom is pretty sure to strengthen. If the Universities ever became national institutions in such a sense that it became almost the rule for the middle-class Dis- senters as well as Churchmen to send their sons there, a culture would be diffused amongst them quite certain to reduce so materially the vulgar pleasure of choosing a mere religious spokesman of their own narrow ideas, that we might fairly expect to see the practical liberty of Dissenting ministers almost rival that of the clergy of our national Church.

It may be thought that after such admissions as these, we go almost as far as Mr. Coleridge, and virtually maintain that "nonconformity, when brought face to face with the culture and influences of the Church of England, could not long main- tain the battle." Of this, however, though preferring as we do the large and liberal catholicity of our national Church to any Church of narrower basis, we are by no means well satisfied. While our national Church has exclusive control of the most potent sources of intellectual culture, she has an advantage which makes it very difficult to compare her fairly with any Dissenting Church. But one thing seems clear, that her episcopal form is not favourable to religious influences rising from the people. A great thinker has said, that as a rule, while intellectual influences descend, great faiths ascend,— in other words, that the deeper springs of religious emotion are more easily touched by men who have sprung from imme- diate contact with poverty, misery, and toil, than by men chosen under such influences as regulate the order of our own hier- archy. Unquestionably the most popular movement which ever originated in our national Church—the Wesleyan--was soon found to be alien to its spirit and was expelled by it,—and even the most popular Church movement of our own day, that of the Christian Socialists, as they were once called, the movement of Mr. Maurice, Mr. Kingsley, and their friends, was very near suffering a like fate. Now we cannot but think that the characteristic religious strength of the Dissenters, even after they had got the thorough culture of our Universities, would still remain in their greater readiness to sympathize with religious movements of popular origin, to discern the prevail- ing religious wants of the people at any given time, and to feel more keenly that the highest truth must somehow satisfy those wants. The episcopal system of Church government will always tend to be the more didactic, the popular and what we may call the elective system will always tend to be the more enthusiastic,—and, if really equal in culture, they might render almost equal services to the State.

But if this be, as we conjecture, the effect of introducing Dissenters in considerable numbers to the Universities,—of making the Universities co-extensive with the nation, —would certainly not be, as Mr. Henley, and Mr. Beresford Hope, and Mr. Gathorne Hardy, and Lord Cranborne maintain, to decompose all religious faith and encourage a universal scepticism. In fact no speakers give us a stronger impression of the actual scepticism which is growing upon the Church than the speeches of these defenders of its orthodoxy who warn us that the slightest recognition of theological differences will break down the whole fabric of Christian faith altogether. They say, just as an architect does of a house with rotten foundations,—' touch nothing, and it may stand a little yet, but if you make any change you will have it tumbling about your ears.' Any careful critic listening to Lord Cranborne and to Mr. Coleridge, to Mr. Henley and Mr. Butler-Johnstone, would say at once that Lord Cranborne and Mr. Henley took the sceptical view, the despairing view, the view which assumes that free inquiry will scatter theology to the winds, and the other two the confident, the trustful view, the view which is certainly consistent, and in at least one of the two cases certainly combined, with a strong positive faith. And it is the very fact that the conservative, the exclusive, view of the Church theology is so timid, so despondent, so cowardly, which induces us to look with hope to the influence of a truly cultivated disenting school of theology over our Universities. If such a school retained its natural character at all, it would, we think, show traces of closer contact with popular feeling and want, more of the strength and fervour of plebeian sympathies, than the reigning school. What we may fairly hope is, that what an infusion of working-class vigour will do for the national politics, an infusion of Dissenting theology, after passing through the discriminating sieve of thorough University culture, might do for the national faith. If the languor of Parliament shows signs of an exhausted political middle class,' the languid scepticism of modern culture perhaps shows equal signs of an exhausted cultivated class. It is quite likely that a fresh infusion of popular feeling into the highest intellectual cul- ture of the nation, may restore all that earnestness to theology which conservative political sceptics like Lord Cranborne and Mr. Henley so emphatically prophesy that it will undermine and destroy.