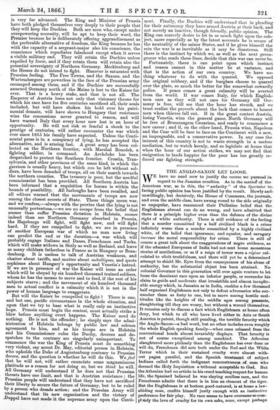 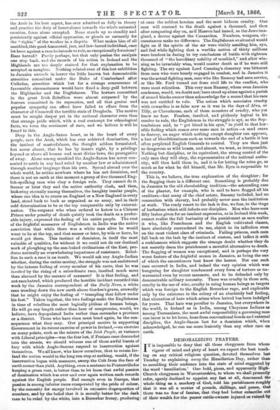 WE have no need now to justify the course we pursued iu- regard to the Jamaica cruelties. As in the matter of the American war, so in this, the " audacity " of the Spectator in. facing public opinion has been justified by the result. Slowly andi unwillingly, but decisively, the House of Commons, the journals, and even the middle class, have swung round to the side originally so unpopular, have renounced their Philistine belief that the. Englishman abroad can do no wrong, and have admitted that there is a principle higher even than the defence of the divine right of white authority. There is still evidence of the feeling that a murder' committed by a half civilized black is a crime infinitely worse than a murder committed by a highly civilized white, of the belief that 'ignorance, and squalor, and savagery increase the moral responsibility for crime. There is still of course a great talk about the exaggerations of negro evidence, as if the educated Europeans of India had not sent home monstrous stories of mutilations, or as if a reign of terror were a regime cal- culated to elicit truthfulness, and there will yet be a determined attempt to shield Mr. Eyre from the consequences of his abuse of authority, but the substantial object has been attained. No. colonial Governor in this generation will ever again venture to let loose the dominant race upon an inferior people, or surrender his claim to guide and moderate that irresistible and almost inexplic- able energy which, in Jamaica as in India, enables a few thousand half organized Englishmen not only to defeat adversaries who out- number them as forty to one, but to move among hostile mul- titudes like the knights of the middle ages among peasants, slaughtering till they are weary, but without a wound themselves. It remains only to discuss a fact which Englishmen at home often deny, but which to all who have lived either in Asia or South America is patent, though still puzzling, the terrible ferocity which the Anglo-Saxon—a bad word, but no other includes even roughly the whole English speaking family—when once released from the conventional bonds almost invariably displays. That ferocity is not of course exceptional among mankind. The Athenian slaughtered more pitilessly than the Englishman has ever done or will do, Frenchmen did acts both under the Red and the White Terror which in their sustained cruelty were almost with- out pagan parallel, and the Spanish treatment of subject Indians called forth the indignant remonstrances of men who deemed the Holy Inquisition a tribunal acceptable to God. But the Athenian had no article in his creed teaching respect for human life, the Spaniard believed he was slaying soulless men, and the Frenchman admits that there is in him an element of the tiger. But the Englishman is at bottom good-natured, is at home a law- abiding man, credits himself justly enough with an instinctive preference for fair play. No race seems to have overcame so coin- ihtely the love of cruelty for its own sake, none, except perhaps the Arab in his best aspect, has ever admitted so fully in theory and practice the duty of benevolence towards the whole animated creation, foxes alone excepted. None stands up so steadily and persistently against official oppression, or pleads so earnestly for the " rights" of the weaker in a dispute. What makes him of all mankind, this good-baunoured, just, and law-bound individual, once let loose against a race he intends to rule, so exceptionally ferocious? Race hatred? Partly perhaps, but that only pushes the analysis one step back, and the records of his action in Ireland and the Highlands are too deeply stained for. that explanation to be accepted as complete. Nothing related even of, this last exhibition in Jamaica exceeds in horror the little known but demonstrable atrocities committed under the Duke of Cumberland after Culloden, atrocities which but for a strange concurrence of favourable circumstances would have fixed a deep gulf between the Highlander and the Englishman. The horrors committed in the great Irish Rebellion were almost surpassed by the horrors committed in its repression, and all that genius and popular sympathy can effect have failed to efface from the character of Cromwell the terrible stain of Drogheda. The motive must be sought deeper yet in the national character even than that strange pride which, with a cool contempt for ethnological facts, we term the sentiment of race, and we believe it will be found in this.

This is, we believe, the tine explanation of the slaughter; for the flogging there is a different one. Something is probably due in Jamaica to the old slaveholding tradition—the astounding case of the planter, for example, who is said to have flogged all his creditors—but many of the chief actors, Ramsay included, had no connection with slavery, had probably never seen the institution at work. The ready resort to the lash is due, we fear, to the tinge of barbarism which still infects our discipline. Men who have seen fifty lashes given for an insolent expression, as in Ireland this week, cannot realize the full barbarity of the punishment as men realize it who, like Frenchmen and the English cultivated classes, have absolutely surrendered its use, object to its infliction even on the most violent class of criminals. Failing prisons, such men fall back on the lash by the instinct of custom, and inflict it with a recklessness which suggests the strange doubt whether they do not secretly deem the punishment a merciful alternative to death. The flogging of women was exceptional, and is perhaps the very worst feature of the frightful scenes in Jamaica, as being the one of which the executioners best knew the horror. Not one such case occurred in India, and indeed the very opinion which was hungering for slaughter -condemned every form of torture as un- warranted even by recent massacre, and to be defended only by demonstrable military necessity. There was cruelty in those ads, cruelty in the use of wire, cruelty in using human beings as targets which was foreign to the English Berserker rage, and explicable only by the existence in the colony of an absolutely bad feeling, that ulceration of hate which arises when hatred has been indulged for years. That hate was peculiar to Jamaica, but everywhere in the world, in Ireland as in India, among Cheyenne Indians as among Tasmanians, the most awful responsibility a governing man can incur is to let loOse, loose from conventional bonds and external discipline, the Anglo-Saxon lust for a dominion which, when acknowledged, he can use more leniently than any other race on earth.