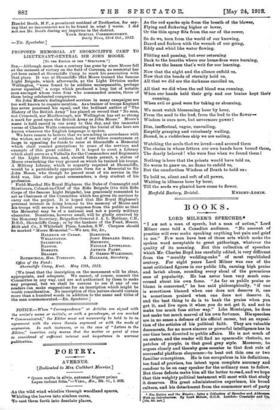 [To THE EDITOR OF THE " SPECTATOR."j SIR,—Although more than a century has gone by since Moore fell at the moment of victory on the field of Corunna, no memorial has ,yet been raised at Shorncliffe Camp to mark his association with that place. It was at Shorncliffe that Moore trained the famous Light Brigade, which afterwards, as the Light Division under Wellington, " were found to be soldiers unsurpassable, perhaps never equalled," a corps which produced a long list of notable men amongst whom were four who commanded armies, three of them being celebrated conquerors.

Sir John Moore's distinguished services in many campaigns are too well known to require mention. As a trainer of troops England lias never possessed his equal, and the brilliant author of " The History of the British Army" has placed on record that "No man, not Cromwell, nor Marlborough, nor Wellington has set so strong a mark for good upon the British Army as John Moore." Moore's name is held sacred in our army to this day, and the immortal verses of Charles Wolfe commemorating the burial of the hero are known wherever the English language is spoken. We have reason to believe that we are acting in accordance with the wishes, not only of soldiers, but of our fellow countrymen at large in appealing for funds to raise at Shorncliffe a Memorial which shall remind generations to come of the services and example of this great soldier. It is hoped to erect a Library which shall serve as a Valhalla for the Commanders and Regiments of the Light Division, and, should funds permit, a statue of Moore overlooking the very ground on which he trained his troops. A Military Library, which is urgently required at Shorncliffe, would be a particularly appropriate form for a Memorial to Sir John Moore, who though he passed most of his service in the field was, like other great commanders, a deep student of his profession. • Field-Marshal His Royal Highness the Duke of Connaught and Strathearn, Colonel-in-Chief of the Rifle Brigade (the 95th Rifle Corps of the famous Light Brigade), has graciously consented to act as Chairman of the Committee which has given its services to carry out the project. It is hoped that His Royal Highness's personal interest in doing honour to the memory of Moore and his troops will secure a liberal response from the public so that the Memorial may be of a national and not a purely military character. Donations, however small, will be gladly received by the Honorary Secretary, Brigadier-General J. A. L. Haldane, C.B., D.S.O., Shorncliffe Camp; or by the bankers of the Fund, Messrs. Holt and Co., 3 Whitehall Place, London, S.W. Cheques should be marked "Moore Memorial."—We are, Sir, dc.,

[We trust that the inscription on the monument will be clear, appropriate, and adequate. We cannot, of course, commit the Committee in any way, and are not authorized by them to make any proposal, but we shall be curious to see if any of our readers can make suggestions for an inscription which might be worth consideration. No inscription of this nature should contain snore than a hundred words in addition to the name and titles of the man commemorated.—En. Spectator.]