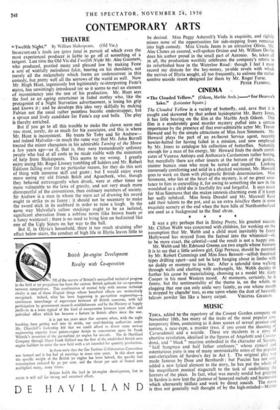 (Leicester Square.) The Clouded Yellow is a variety of butterfly, and, save that it is caught and skewered by that ardent lepidopterist Mr. Barry Jones, it has little bearing on the film at the Marble Arch Odeon. This film is a moderately good murder mystery puffed into a certain importance by the presence of that ever-admirable actor Mr. Trevor Howard and by the simple attractions of Miss Jean Simmons. Mr. Howard plays the part of an ex-Secret Service agent, recently bowler-hatted for having failed in a mission, and now employed by Mr. Jones to catalogue his collection of butterflies. Naturally enough for a man of his energy, Mr. Howard finds the death certifi- cates of Vanessa Antiopa and Anthocaris Cardamines rather boring, but mercifully there are other insects at the bottom of the garden, sinister human ones who must be netted and impaled. Looking immensely comforting and solid in a checked waistcoat, Mr. Howard goes to work on them with phlegmatic British determination. Miss Simmons, who lies at the heart of the mystery, is of no great assis- tance to him in unravelling it, for owing to something she saw in the woodshed as a child she is fearfully fey and forgetful. It says much for Miss Simmons that she makes amnesia charming even if it keeps her sadly subdued. Miss Sonia Dresdel and Mr. Maxwell Reed add their talents to the pot, and as an extra benefice there is some exquisite scenery at the end when the bare hills of Northumberland are used as a background to the final chlse.

It was a pity perhaps that in Sitting Pretty, his greatest success, Mr. Clifton Webb was concerned with children, for working on the assumption that Mr. Webb and a child must inevitably be funny Hollywood has strayed from the factual into the whimsical—or, to be more exact, the celestial—and the result is not a happy one.

Mr. Webb and Mr. Edmund Gwenn are two angels whose business it is to see that a little unborn girl, Gigi Perreau, should be parented by Mr. Robert Cummings and Miss Joan Bennett—selfish theatrical types drifting apart—and not be kept hanging about in limbo with no daddy or mummy to love her. After a splendid time walking through walls and chatting with archangels, Mr. Webb decides to further his cause by materialising, choosing as a model Mr. Gary Cooper in his most Western mood. At moments, certainly, he is funny, but the sentimentality of the theme is, on the whole, so clogging that one can only smile very faintly, as one whose mouth is stopped by cherubs' toes, as one upon whom the dust of heavenly talcum powder lies like a heavy carpet. VIRGINIA GRAHAM.