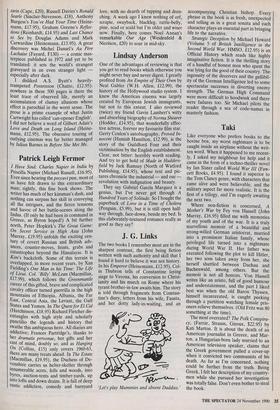 Like everyone who prefers books to the bovine box, my worst nightmare is to be caught inside an airplane without the writ- ten word. When it happened to me recent- ly, I asked my neighbour for help and it came in the form of a techno-thriller novel by Ian Slater called World War III (Faw- cett Books, £4.95). I found it superior to the Tom Clancy genre, with characters that came alive and were believable, and the military aspect far more realistic. It is the first of a trilogy, and I'm eagerly awaiting the next two.

Where non-fiction is concerned, A Mother's War by Fey von Hassell (John Murray, £16.95) filled me with memories of my youth and of the war. It is a truly marvellous memoir of a beautiful and strong-willed German aristocrat, married into a prominent Italian family, whose privileged life turned into a nightmare during World War II. Her father was executed following the plot to kill Hitler, her two sons taken away from her, she herself shuttled between Dachau and Buchenwald, among others. But the memoir is not all horrors. Von Hassell writes like an aristo, full of good humour and understatement, and the part I liked best was when the old Baron Thyssen, himself incarcerated, is caught peeking through a partition watching female pris- oners relieve themselves. (Old Fritz was 80 something at the time).

The most overrated? The Polk Conspira- cy, (Farrar, Strauss, Giroux, $22.95) by Kati Marton. It is about the death of an American journalist in Greece, and Mar- ton, a Hungarian-born lady married to an American television speaker, claims that the Greek government pulled a cover-up when it convicted two communists of his death. As far as I'm concerned, nothing could be further from the truth. Being Greek, I felt her description of my country- men while she pursued her investigation was totally false. Don't even bother to steal the book.