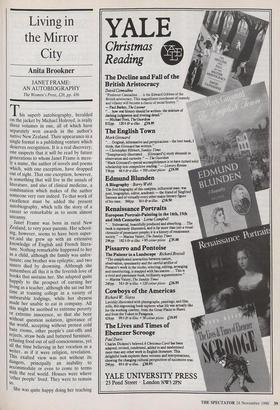 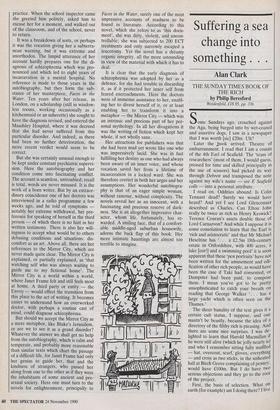 Living in the Mirror City

This superb autobiography, heralded on the jacket by Michael Holroyd, is really three volumes in one, all of which have separately won awards in the author's native New Zealand. Their appearance in a single format is a publishing venture which deserves recognition. It is a real discovery; one suspects that it will be read by future generations to whom Janet Frame is mere- ly a name, the author of novels and poems Which, with one exception, have dropped out of sight. That one exception, however, IS something that will live in the annals of literature, and also of clinical medicine, a combination which makes of the author someone very rare indeed. To that work of excellence must be added the present autobiography, which tells the story of a career so remarkable as to seem almost uncanny. Janet Frame was born in rural New Zealand, to very poor parents. Her school- ing, however, seems to have been super- ior,and she grew up with an extensive knowledge of English and French litera- ture. Nothing remarkable happened to her as a child, although the family was unfor- tunate; one brother was epileptic, and two sisters died by drowning. Although she remembers all this it is the feverish love of books that sustains her. She adapted quite happily to the prospect of earning her living as a teacher, although she sat out her time at training college in a variety of unbearable lodgings, while her shyness made her unable to eat in company. All this might be ascribed to extreme poverty or extreme innocence, so that she bore Without question isolation, ignorance of the world, accepting without protest cold bare rooms, other people's cast-offs and rejects, straw beds and battered furniture, refusing food out of self-consciousness, yet all the time believing in her vocation as a wnter, as if it were religion, revelation. This exalted view was not without its dangers, principally an inability to accommodate or even to come to terms With the real world. Houses were where Other people' lived. They were to remain so.

She was quite happy doing her teaching practice. When the school inspector came she greeted him politely, asked him to excuse her for a moment, and walked out of the classroom, and of the school, never to return.

It was a breakdown of sorts, or perhaps it was the vocation giving her a subterra- nean warning, but it was extreme and unorthodox. The limpid utterance of her account hardly prepares one for the di- agnosis of schizophrenia which was pro- nounced and which led to eight years of incarceration in a mental hospital. No reference is made to those years in the autobiography, but they form the sub- stance of her masterpiece, Faces in the Water. Ten years after her release, in London, on a scholarship (still in window- less rooms, working occasionally as a kitchenmaid or an usherette) she sought to have the diagnosis revised, and entered the Maudsley Hospital, where it was decreed that she had never suffered from this particular disorder. And indeed, as there had been no further deterioration, the more recent verdict would seem to be correct.

But she was certainly unusual enough to be kept under constant psychiatric supervi- sion. Here the autobiography and her condition come into fascinating conflict. The account is seamless, untroubled; recall is total, words are never misused. It is the work of a born writer. But by an extraor- dinary coincidence one of her doctors was interviewed in a radio programme a few weeks ago, and he told of symptoms — notably her extreme withdrawal, her pre- ference for speaking of herself in the third person — of which there is no hint in her written testimony. There is also her will- ingness to accept what would be to others debasing conditions and situations: dis- comfort as an art. Above all, there are her references to the Mirror City, which are never made quite clear. The Mirror City is explained, or partially explained, as 'that watching self who was always waiting to guide me to my fictional home'. The Mirror City is a world within a world, where Janet Frame felt and still feels most at home. A third party or entity — the Envoy — would effect the transition from this place to the act of writing. It becomes easier to understand how an overworked doctor, with perhaps a routine cast of mind, could diagnose schizophrenia.

But should we accept the Mirror City as a mere metaphor, like Blake's Jerusalem, or are we to see it as a grand disorder? Whatever the answer we shall get no help from the autobiography, which is calm and temperate, and probably more reasonable than similar texts which chart the passage of a difficult life, for Janet Frame had only her genius to guide her, that and the kindness of strangers, who passed her along from one to the other as if they were the inhabitants of some ancient and pre- sexual society. Here one must turn to the novels for enlightenment, principally to Faces in the Water, surely one of the most impressive accounts of madness to be found in literature. According to this novel, which she refers to as 'this docu- ment', she was dirty, violent, and uncon- trollable; she was subjected to 200 ECT treatments and only narrowly escaped a leucotomy. Yet the novel has a dreamy organic integrity, all the more astounding in view of the material with which it has to deal.

It is clear that the early diagnosis of schizophrenia was adopted by her as a defence, for she had trouble in discarding it, as if it protected her inner self from feared encroachments. Here the doctors were of immense assistance to her, enabl- ing her to divest herself of it, or at least enabling her to transform it into a metaphor — the Mirror City — which was an intrinsic and precious part of her per- sonal mythology. In all her divagations it was the writing of fiction which kept her whole, if not wholly sane.

Her attractioin for publishers was that she had been mad yet wrote like one who was impressively lucid. She was ih fact fulfilling her destiny as one who had always been aware of an inner voice, and whose vocation saved her from a lifetime of incarceration in a locked ward. She was therefore correct in both her urges and her assumptions. Her wonderful autobiogra- phy is that of an eager simple woman, without rancour, without complexity. The novels reveal her as an innocent, with a fascinating and precious reserve of dark- ness. She is an altogether impressive char- acter, whom life, fortunately, has re- warded. A smiling face, that of a comfort- able middle-aged suburban housewife, adorns the back flap of this book. Her more intimate hauntings are almost too terrible to imagine.