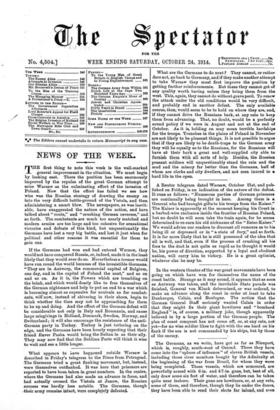 THE first thing to note this week is the well-marked general improvement in the situation. We must begin by looking east. There the position has been enormously improved by the repulse of the great German attempt to seize Warsaw as the culminating effort of the invasion of Poland. Now that the effort has failed we see how wise was the Russian strategy of drawing the enemy on into the very difficult battle-ground of the Vistula, and then administering a smart blow. The newspapers, as was inevit- able, have exaggerated the nature of the action, and have talked about " routs," and "crushing German reverses," and so forth. The combatants are much too nearly matched and modern armies are too large and too cohesive for sensational victories and defeats of this kind, but unquestionably the Germans have lost a very big battle, and lost it just when for political and other reasons it was essential for them to gain one.