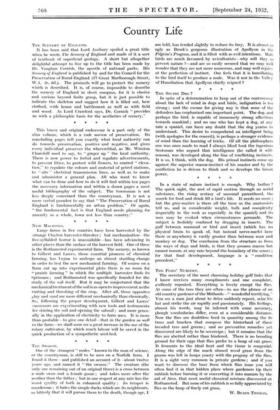 One of the strangest " mules " known to the man of science, or the countryman, is still to be seen on a Norfolk farm. I found it there—and published an account of it—about twelve years ago, and named it " the swoose." The creature (the only one remaining out of an original three) is a cross between a male swan and a female goose ; and takes more- after the mother than the father ; but in one respect at any rate has the worst quality of both in enhanced quality ; its temper is murderous ; it hates the simple ducks which are its neighbours, so bitterly that it will pursue them to the death, though age, I am told, has tended slightly to reduce its fury. It is almost as ugly as Brock's gorgeous illustration of Apollyon in the Pilgrim's Progress, and it is filled with as evil intentions. Mule birds are much favoured by aviculturists—why will they so pervert nature ?—and are so easily secured that we may well wonder that they are not more numerous, and may well rejoice at the perfection of instinct. One feels that it is humiliating to the bird itself to produce a mule. Was it not in the Valley of Humiliation that Apollyon chiefly reigned ?