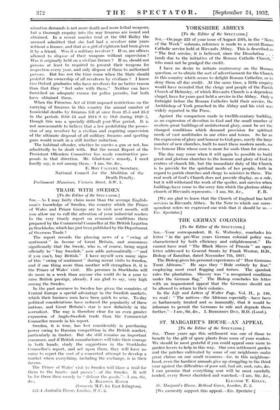 [To the Editor of the SPECTATOR.] Sin,—As I may fairly claim more than the average English- man's knowledge of Sweden, the country which the Prince of Wales and Prince George are to visit next month, will you allow me to call the attention of your industrial readers to the very timely report on economic conditions there prepared by the Commercial Counsellor at the British Legation in Stockholm, which has just been published by the Department of Overseas Trade ?

The report records the pleasing news of a " swing of sentiment " in favour of Great_ Britain, and announces significantly that the Swede, who is, of course, being urged officially to " buy Swedish," now adds automatically—" and if you can't, buy British." I have myself seen many signs of this " swing of sentiment " during recent visits to Sweden, and if one thing more than another will strengthen it; it is the Prince of Wales' visit. His presence in Stockholm will do more in a week than anyone else could do in a year to raise British prestige, already, I am glad to say, very high among the Swedes.

In the past nearness to Sweden has given the countries of Central Europe a special advantage in the Swedish markets, which their business men have been quick to seize. To-day political considerations have reduced the popularity of these nations, and Great Britain's star is now definitely in the ascendant. The way is therefore clear for an even greater expansion of Anglo-Swedish trade than the Commercial Counsellor records in his report.

Sweden, it is true, has lost considerably in purchasing power owing to Russian competition in the British market, particularly in timber. But she still remains an important consumer, and if British manufacturers will take their courage in both hands, study the suggestions in the Stockholm Counsellor's report, and act upon them, they will have no cause to regret the cost of a concerted attempt to develop a market where everything, including the exchange, is in their favour.

The Prince of Wales visit to Sweden will blaze a trail for them to the hearts--and purses !--of the Swedes. It will be for them then merely to " deliver the goods."-1 am, Sir, (formerly M.P. for East Islington). 421-4 Australia House, London, W.C. 2.