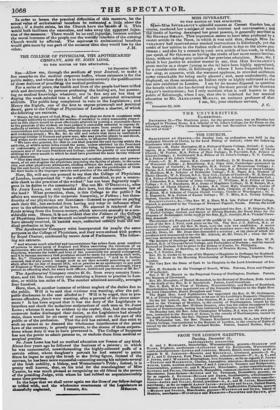 Livia/tartar's splendid success at Covent Garden has, of 'course, rendered her a subject of much interest and conversation - an

iWeredit of having developed her great powers, is generally ascribed to

jr, GEORGE SMART. This impression seems to have been prOduced by a recent article in the Times, in which it was said that, though Miss Im VERARITY had received some musical instructions in Edinburgh, yet the credit of her tuition in the Italian style of music is due to the above gen. tleman ; and also by a remark in your own article of last week, in which you speak of Sir GEORGE as having the credit of her more recent instruc- tions, without taking any notice of her previous education. Now, Sir, I think it but justice to another Master to say, that Miss INvertAnirv's great merits as a singer (young as she is) have been highly appreciated, for a considerable time, in Edinburgh ; where I have frequently heard. her sing, at concerts, with the warmest applause, to crowded audiences never remarkable for being easily pleased ; and, most undoubtedly, she displayed, on those occasions, an Italian style as highly cultivated as she has now exhibited ill London. I am by no ineans disposed to question the benefit which she has derived during the short period of Sir Geouus SmAitT's instructions ; but I only mention what is well known to the public of Edinburgh, when I say, that she is indebted for her musical education to Mr. ALEXANDER MVERAY, an eminent professor of that

city. I am, Sir, your obedient servant,