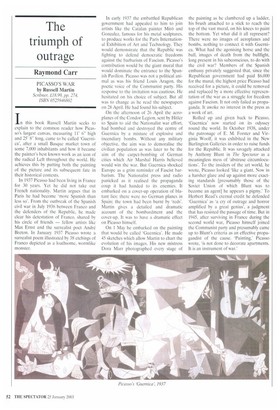 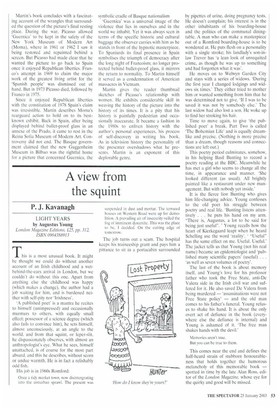 The triumph of outrage

PICASSO'S WAR by Russell Martin Scribner, £18.99, pp. 274, ISBN 0525946802 In this book Russell Martin seeks to explain to the common reader how Picasso's largest canvas, measuring 11' 6" high and 25 8" long. came to be called `Guernica', after a small Basque market town of some 7,000 inhabitants and how it became the painter's best known work as an icon of the radical Left throughout the world. He achieves this by putting both the painting of the picture and its subsequent fate in their historical contexts.

In 1937 Picasso had been living in France for 30 years. Yet he did not take out French nationality, Martin argues that in Paris he had become 'more Spanish than less so'. From the outbreak of the Spanish civil war in July 1936 between Franco and the defenders of the Republic, he made clear his detestation of Franco, shared by his circle of friends — fellow artists like Max Ernst and the surrealist poet Andre Breton. In January 1937 Picasso wrote a surrealist poem illustrated by 38 etchings of Franco depicted as a loathsome, wormlike monster. In early 1937 the embattled Republican government had appealed to him to join artists like the Catalan painter Miro and Gonzalez, famous for his metal sculptures, to produce works for the Paris International Exhibition of Art and Technology. They would demonstrate that the Republic was fighting to defend democratic freedoms against the barbarism of Fascism. Picasso's contribution would be the giant mural that would dominate the entrance to the Spanish Pavilion. Picasso was not a political animal as was his friend Louis Aragon, the poetic voice of the Communist party. His response to the invitation was cautious. He hesitated on his choice of subject. But all was to change as he read the newspapers on 28 April. He had found his subject.

On the afternoon of 26 April the aeroplanes of the Condor Legion, sent by Hitler to Spain to aid the Nationalist war effort, had bombed and destroyed the centre of Guernica by a mixture of explosive and incendiary bombs. Without any military objective, the aim was to demoralise the civilian population as was later to be the aim of the carpet-bombing of German cities which Air Marshal Harris believed would win the war. But Guernica shocked Europe as a grim reminder of Fascist barbarism. The Nationalist press and radio panicked as it realised the propaganda coup it had handed to its enemies. It embarked on a cover-up operation of blatant lies: there were no German planes in Spain; the town had been burnt by 'reds'. Martin gives a detailed and dramatic account of the bombardment and the cover-up. It was to have a dramatic effect on Picasso himself.

On 1 May he embarked on the painting that would be called `Guernica'. He made 45 sketches which allow Martin to chart the evolution of his images. His new mistress Dora Marr photographed every stage of the painting as he clambered up a ladder, his brush attached to a stick to reach the top of the vast mural, on his knees to paint the bottom. Yet what did it all represent? There were no images of aeroplanes and bombs, nothing to connect it with Guernica. What had the agonising horse and the bull, images of death from the bullfight, long present in his subconscious, to do with the civil war? Members of the Spanish embassy privately suggested that, since the Republican government had paid $6,000 for the mural, the highest price Picasso had received for a picture, it could be removed and replaced by a more effective representation of the war as a struggle for freedom against Fascism. It not only failed as propaganda. It awoke no interest in the press as a work of art.

Rolled up and given back to Picasso, `Guernica' now started on its odyssey round the world. In October 1938, under the patronage of E. M. Forster and Virginia Woolf, it was exhibited in the New Burlington Galleries in order to raise funds for the Republic. It was savagely attacked by Anthony Blunt in The Spectator as a meaningless mess of 'abstruse circumlocutions'. To the insiders of the art world, he wrote, Picasso looked 'like a giant. Now in a harsher glare and up against more exacting standards [presumably those of the Soviet Union of which Blunt was to become an agent] he appears a pigmy.' To Herbert Read's eternal credit he defended 'Guernica' as 'a cry of outrage and horror amplified by a great genius', a judgment that has resisted the passage of time. But in 1945, after surviving in France during the second world war, Picasso himself joined the Communist party and presumably came up to Blunt's criteria as an effective propagandist of the cause. 'Painting,' Picasso wrote, is not done to decorate apartments. It is an instrument of war.' Martin's book concludes with a fascinating account of the wrangles that surrounded the question of the picture's final resting place. During the war. Picasso allowed `Guernica' to be kept in the safety of the New York Museum of Modern Art (Mama), where in 1961 or 1962 I saw it being restored and repainted behind a screen. But Picasso had made clear that he wanted the picture to go back to Spain once it enjoyed Republican liberties. Franco's attempt in 1969 to claim the major work of the greatest living artist for the 'Spanish people' was dismissed out of hand. But in 1973 Picasso died, followed by Franco in 1975.

Since it enjoyed Republican liberties with the constitution of 1978 Spain's claim was irresistible. Martin describes Mama's rearguard action to hold on to its bestknown exhibit. Back in Spain, after being displayed behind bullet-proof glass in an annexe of the Prado, it came to rest in the Reina Sofia Museum of Modern Art. Controversy did not end. The Basque government claimed that the new Guggenheim Museum in Bilbao was the rightful home for a picture that concerned Guernica, the symbolic cradle of Basque nationalism `Guernica' was a universal image of the violence that lies in ourselves and in the world we inhabit. Yet it was always seen in terms of the specific historic and cultural baggage the observer carries with him as he stands in front of the hypnotic masterpiece. To Spaniards its final presence in Spain symbolises the triumph of democracy after the long night of Francoism; no longer protected behind bullet-proof glass, it mirrors the return to normality. To Martin himself it served as a condemnation of American massacres in Vietnam.

Martin gives the reader thumbnail sketches of Picasso's relationship with women, He exhibits considerable skill in weaving the history of the picture into the history of its times. It is a pity that his history is painfully pedestrian and occasionally inaccurate. It became a fashion in the 1980s to enliven history with the author's personal experiences, his process of self-discovery in writing his book. As in television history the personality of the presenter overshadows what he presents. Martin is an exponent of this deplorable genre.