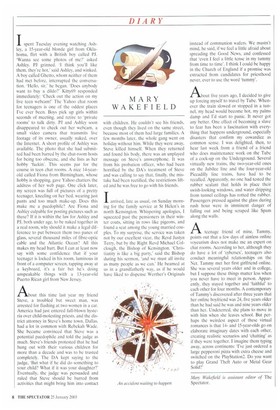 Oklahoma, flirt with a British boy called PJ. `Wanna see some photos of me?' asked Ashley. PJ grinned. 'I think you'll like them, they're hot,' said Ashley, and winked. A boy called Ghetto, whom neither of them had met before, interrupted the conversation. 'Hello, sir,' he began. 'Does anybody want to buy a dildo?' Kitty69 responded immediately: 'Check out the action on my live teen webcam!' The Yahoo chat room for teenagers is one of the oddest places I've ever been, Boys pick up girls within seconds of meeting, and retire to 'private rooms' to talk dirty. PJ and Ashley soon disappeared to check out her webcam, a small video camera that transmits live footage of its owner, usually naked, over the Internet. A short profile of Ashley was available. The photo that she had submitted had been barred by the chat-room hosts for being too obscene, and she lists as her hobby luckin'. This seems par for the course in teen chat rooms. A nice 14-yearold called Fiona from Birmingham, whose hobby is shopping. gave Yahoo chatters the address of her web page. One click later, my screen was full of pictures of a pretty teenager, kneeling on her bed, wearing just pants and too much make-up. Does this make me a paedophile? Are Fiona and Ashley culpable for posting pictures such as these? If it is within the law for Ashley and PJ, both under age, to be naked together in a real room, why should it make a legal difference to put between them two panes of glass, several thousand miles of fibre-optic cable and the Atlantic Ocean? All this makes my head hurt. But I can at least now say with some confidence that if your teenager is locked in his room, luminous in front of a computer screen, tapping away at a keyboard, it's a fair bet he's doing unspeakable things with a 13-year-old Puerto Rican girl from New Jersey.

About this time last year my friend Steve, a troubled but sweet man, was arrested for flashing at two women in a car. America had just entered full-blown hysteria over child-molesting priests, and the district attorney in Steve's home town, Dallas, had a lot in common with Rebekah Wade. She became convinced that Steve was a potential paedophile and told the judge as much. Steve's friends protested that he had hung out with their various children for more than a decade and was to be trusted completely. The DA kept saying to the judge, But what if he did do something to your child? What if it was your daughter'?" Eventually, the judge was persuaded and ruled that Steve should be barred from activities that might bring him into contact

with children. He couldn't see his friends, even though they lived on the same street, because most of them had large families. A few months later, the whole gang went on holiday without him. While they were away, Steve killed himself. When they returned and found his body, there was an unplayed message on Steve's answerphone. It was from his probation officer, who had been horrified by the DA's treatment of Steve and was calling to say that, finally, the mistake had been rectified, the restrictions lifted and he was free to go with his friends.

Iarrived, late as usual, on Sunday morning for the family service at St Helen's in north Kensington. Whispering apologies, I squeezed past the pensioners in their winter coats, sitting in rows like pigeons, and found a seat among the young married couples. To my surprise, the service was taken not by our excellent vicar, the Revd Justyn Terry, but by the Right Revd Michael Coldough, the Bishop of Kensington. 'Christianity is like a big party,' said the Bishop during his sermon, 'and we must all invite as many people as we can.' He beamed at us in a grandfatherly way, as if he would have liked to dispense Werther's Originals

instead of communion wafers. We mustn't mind, he said, if we feel a little afraid about spreading the Good News, and confessed that 'even I feel a little tense in my tummy from time to time. I think I could be happy in the Church of England if a promise was extracted from candidates for priesthood never, ever to use the word 'tummy'.

About five years ago, I decided to give up forcing myself to travel by Tube. Whenever the train slowed or stopped in a tunnel, my head would become hot, my palms damp and I'd start to panic. It never got any better. One effect of becoming a slave to fear has been a fascination with everything that happens underground, especially disasters that confirm my cowardice as common sense. I was delighted, then, to hear last week from a friend of a friend who does maintenance work on the Tube of a cock-up on the Underground. Several virtually new trains, the two-year-old ones on the Jubilee line and the four-year-old Piccadilly line trains, have had to be recalled. Apparently, no one had tested the rubber sealant that holds in place their swish-looking windows, and water dripping from tunnel ceilings has rotted the rubber. Passengers pressed against the glass during rush hour were in imminent danger of falling out and being scraped like Spam along the walls.

Ateenage friend of mine, Tammy, points out that a few days of aimless online voyeurism does not make me an expert on chat rooms. According to her, although they do have a lot of `cybersex., teenagers also conduct meaningful relationships on the Net. Tammy met her first girlfriend online. She was several years older and in college, but I suppose these things matter less when you never have to meet in person. Apparently, they stayed together and 'faithful' to each other for four months. A contemporary of Tammy's discovered after three years that her online boyfriend was 24, five years older than he had said he was and nine years older than her. Undeterred, she plans to move in with him when she leaves school. But perhaps the weirdest aspect of these virtual romances is that 14and 15-year-olds go on elaborate imaginary dates with each other, creating realistic scenarios and 'chatting' as if they were together. I imagine them typing away, across continents: 'I've just ordered a large pepperoni pizza with extra cheese and switched on the PlayStation2. Do you want to play Grand Theft Auto or Metal Gear Solid?'

Mary Wakefield is assistant editor of The Spectator.