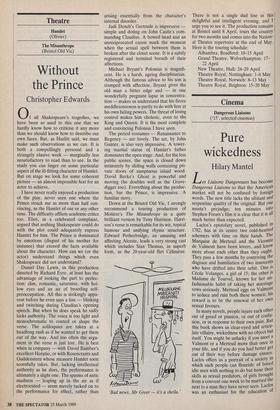 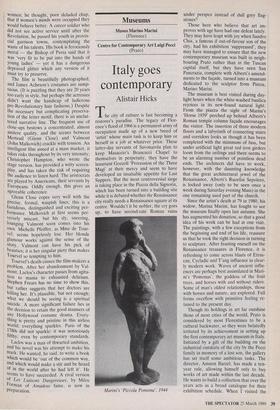 Les Liaisons Dangereuses has become Dangerous Liaisons so that the American market will not be confused by foreign words. The new title lacks the sibilant and serpentine quality of the original. But one mustn't prejudge; ten minutes into Stephen Frears's film it is clear that it is all much better than expected. Laclos's epistolary novel, published in 1782, has at its centre two cold-hearted schemers with time on their hands. The Marquise de Merteuil and the Vicomte de Valmont have been lovers, and know more about each other than they ought. They pass a few months by contriving the disgrace and humiliation of two innocents who have drifted into their orbit. One is Cecile Volanges, a girl of 15; the other is Madame de Tourvel, known for her un- fashionable habit of taking her marriage vows seriously. Merteuil eggs on Valmont to seduce and ruin both these women; his reward is to be the renewal of her own sexual favours.

In many novels, people injure each other out of greed or passion, or out of confu- sion, or in response to their own pain. But this book shows us clear-eyed and articu- late villainy, wickedness with no object but itself. You might be unlucky if you meet a Valmont or a Merteuil more than once in your life, and if you do you had better get out of their way before damage ensues. Laclos offers us a portrait of a societY in which such people can flourish: of bored idle men with nothing to do but hone their skills as sexual predators, of girls brought from a convent one week to be married the next to a man they have never seen. Laclos was an enthusiast for the education of

women; he thought, poor deluded chap, that if women's minds were occupied they would behave better. A career soldier who did not see active service until after the Revolution, he passed his youth in provin- cial garrison towns, contemplating the waste of his talents. His book is ferociously moral — the Bishop of Pavia said that it was 'very fit to be put into the hands of Young ladies' — yet it has a dangerous depraved glitter which any version of it must try to preserve.

The film is beautifully photographed, and James Acheson's costumes are sump- tuous. (It is puzzling that they are 20 years too early in style, but perhaps the actresses didn't want the handicap of ludicrous Pre-Revolutionary hair fashions.) Despite the necessary but complicating preserva- tion of the letter motif, there is an unclut- tered narrative line. The frequent use of close-ups bestows a concentrated, almost austere quality, and the scenes between Merteuil (Glenn Close) and Valmont (John Malkovich) crackle with tension. An intelligent film aimed at a mass market, it takes risks throughout by its very intensity; Christopher Hampton, who wrote the stage version, has provided a witty screen- play, and has taken the risk of requiring the audience to listen hard. The aristocrats are played by Americans, their servants by Europeans. Oddly enough, this gives an agreeable coherence.

Glenn Close copes very well with the Precise, formal, waspish lines; this is a fastidious, distinguished and exciting per- formance. Malkovich at first seems per- versely miscast, but his sly, sneering, lounging Valmont soon comes into his own. Michelle Pfeiffer, as Mme de Tour- vet, seems hopelessly lost. Her blonde glamour works against the sense of the story, Valmont can have his pick of beauties; it is her singular piety that makes Tourvel so tempting to him. Tourvel's death causes the film-makers a problem. After her abandonment by Val- mont, Laclos's character passes from agita- tion to mania to exhausted delirium. Stephen Frears has no time to show this, but rather suggests that her doctors are killing her. It's plausible, but not enough; what we should be seeing is a spiritual suicide. A more significant failure lies in the decision to retain the good manners of any Hollywood costume drama. Every- thing is pretty and pristine in this airless world; everything sparkles. Paris of the 1.780s did not sparkle: it was notoriously filthy, even by contemporary standards.

Laclos was a man of thwarted ambition, and his novel was his attempt to make his mark. He wanted, he said, to write a book Which would be 'out of the common way, and which would make a stir and be heard of in the world after he had left it'. He seems to have succeeded. A rival version of Les Liaisons Dangereuses, by Milos Forman of Amadeus fame, is now in preparation.