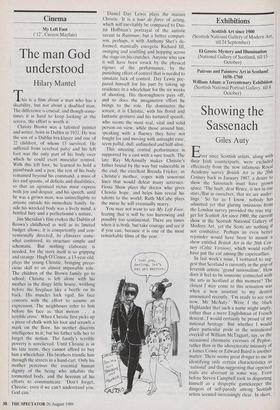 his is a film about a man who has a disability, but not about a disabled man. The difference is crucial; and though some- times it is hard to keep looking at the screen, the effort is worth it.

Christy Brown was a talented painter and writer, born in Dublin in 1932. He was the son of a Dublin bricklayer and one of 22 children, of whom 13 survived. He suffered from cerebral palsy and his left foot was the only part of his body over which he could exert muscular control. With this left foot, he learned to hold a paintbrush and a pen; the rest of his body remained beyond his command, a mass of tics and spasms, of deficits and disabilities, so that an agonised rictus must express both joy and despair, and his speech, until he was a grown man, was unintelligible to anyone outside his immediate family. In- side his wrecked body was a lively mind, a bottled fury and a perfectionist's nature.

Jim Sheridan's film evokes the Dublin of Brown's childhood as well as its limited budget allows; it is competently and con- ventionally directed, its climaxes some- what contrived, its structure simple and schematic. But nothing elaborate is needed, for the story itself is so gripping and strange. Hugh O'Conor, a 13-year-old, plays the young Christie, bringing preco- cious skill to an almost impossible role. The children of the Brown family go to school; Christie is left alone with his mother in the dingy little house, writhing before the fireplace like a beetle on its back. His muscles lock rigid, his face contorts with the effort to assume an expression. The neighbours refer to him before his face as 'that moron . . . a terrible cross'. When Christie first picks up a piece of chalk with his foot and scrawls a mark on the floor, his mother discerns intelligence in it; but his father tells her to forget the notion. The family's terrible poverty is unrelieved. Until Christie is in his late teens, they cannot afford to buy him a wheelchair. His brothers trundle him through the streets in a hand-cart. Only his mother perceives the essential human dignity of the being who inhabits the tormented body, and the heroism of his efforts to communicate. 'Don't forget, Christie, even if we can't understand you, God can.'

Daniel Day Lewis plays the mature Christie. It is a tour de force of acting, which will inevitably be compared to Dus- tin Hoffman's portrayal of the autistic savant in Rainman; but a better compari- son, perhaps, is with Anthony Sher's de- formed, manically energetic Richard III, swinging and scuttling and hopping across the stage on his crutches. Anyone who saw it will have been struck by the physical rigours of the performance, by the punishing effort of control that is needed to simulate lack of control. Day Lewis pre- pared himself for his part by taking up residence in a wheelchair for the six weeks of shooting. His thoroughness pays off, and so does the imaginative effort he brings to the role. He dominates the screen; it is Christie, with his florid and fantastic gestures and his tortured speech, who seems the most real, vital and solid person on view, while those around him, speaking with a fluency they have not fought for and moving with untaught ease, seem pallid, dull, unfinished and half-alive.

This amazing central performance is supported by a cast with a sure touch. The late Ray McAnnally makes Christie's father brutal by the way but vulnerable in the end; the excellent Brenda Fricker, as Christie's mother, copes with sonorous lines that would defeat many actresses. Fiona Shaw plays the doctor who gives Christie hope, and helps him reveal his talents to the world; Ruth McCabe plays the nurse he will eventually marry.

You may not want to see My Left Foot, fearing that it will be too harrowing and possibly too sentimental. There are times when it is both, but take courage and see it if you can, because it is one of the most remarkable films of the year.