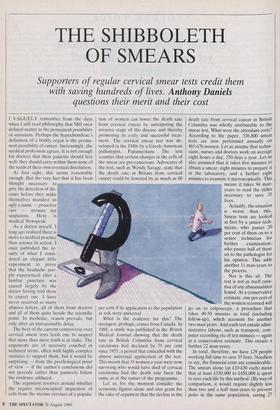 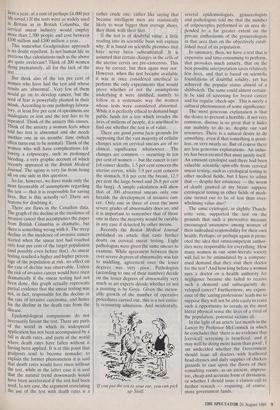 THE SHIBBOLETH OF SMEARS

questions their merit and their cost

I VAGUELY remember from the days when I still read philosophy that Mill once defined matter as the permanent possibility of sensation. Perhaps the hypochondriac's definition of a bodily organ is the perma- nent possibility of cancer. Increasingly, the medical profession agrees. It is not enough for doctors that their patients should feel well: they should carry within them none of the seeds of their own eventual dissolution.

The heat of the current controversy over cervical smear tests leads one to suspect that more than mere truth is at stake. The arguments are of necessity couched in technical terms, often with highly complex statistics to support them, but it would be surprising — from the psychological point of view — if the author's conclusions did not precede rather than passively follow the evidence adduced.

The argument revolves around whether the regular microscopical inspection of cells from the uterine cervixes of a popula- tion of women can lower the death rate from cervical cancer by anticipating the invasive stage of the disease and thereby promoting its early and successful treat- ment. The cervical smear test was de- veloped in the 1940s by a Greek-American pathologist, Papanicolaou. The test assumes that certain changes in the cells of the smear are pre-cancerous. Advocates of the test, such as Wendy Savage, state that the death rate in Britain from cervical cancer could be lowered by as much as 80 per cent if its application to the population at risk were universal.

What is the evidence for this? The strongest, perhaps, comes from Canada. In 1988, a study was published in the British Medical Journal showing that the death rate in British Columbia from cervical carcinoma had declined by 75 per cent since 1955, a period that coincided with the almost universal application of the test. This meant that 35 women a year were now surviving who would have died of cervical carcinoma had the death rate been the same as at the outset of the programme.

Let us for the moment consider the economic figures alone and also grant for the sake of argument that the decline in the death rate from cervical cancer in British Columbia was wholly attributable to the smear test. What were the attendant costs? According to the paper, 536,800 smear tests are now performed annually on 465,676 women. Let us assume that techni- cians, nurses and doctors work on average eight hours a day, 250 days a year. Let us also assumed that it takes five minutes to obtain a smear, eight minutes to prepare it in the laboratory, and a further eight minutes to examine it microscopically. This means it takes 94 man- years to read the slides necessary to save 35 lives.

Actually, the situation is worse than this. Smear tests are looked at first by a junior tech- nician, who passes 20 per cent of them on to a senior technician for further examination, who passes half of these on to the pathologist for his opinion. This adds another 11 man-years to the process.

Nor is this all. The test is not in itself cura- tive of any abnormalities found. At a conservative estimate, one per cent of the women screened will go on to colposcopy, a procedure that takes 40-50 minutes in total (including follow-up), which accounts for another two-man years. And each test entails admi- nistrative labour, such as transport, com- puter recording etc of ten minutes — again at a conservative estimate. This entails a further 22 man-years.

In total, therefore, we have 129 people working full time to save 35 lives. Needless to say, the financial costs are considerable. The smears alone (at £10-£30 each) mean that at least £150,000 to £450,000 is spent to save each life by this method. (By way of comparison, it would require slightly less than two and a half man-years to prevent polio in the same population, saving 27 lives a year, at a cost of perhaps 14,000 per life saved.) If the tests were as widely used in Britain as in British Columbia, the cervical smear industry would employ more than 2,500 people and cost between £100 million and £300 million a year.

This somewhat Gradgrindian approach iS no doubt repellent. Is not human life so precious that calculations such as the above are quite irrelevant? Think of 200 women dying prematurely, all for the lack of the test .

But think also of the ten per cent of Women who have had the test and whose results are 'abnormal'. Very few of them Would go on to develop cancer, but the seed of fear is powerfully planted in their minds. According to one pathology labora- tory, at least five per cent of specimens are inadequate or lost and the test has to be repeated. Think of the anxiety this causes. Think of the anxiety a woman feels when told her test is abnormal and she needs another one in six months' time (which Often turns out to be normal). Think of the women who will have complications fol- lowing a colposcopy, such as prolonged bleeding, a very graphic account of which recently appeared in the British Medical Journal. The agony is very far from being all on one side in this question.

So far, however, we have made only the most favourable of assumptions regarding the test — that it is responsible for saving lives. But is this actually so? There are reasons for doubting it.

Epidemiological comparisons do not necessarily favour the test. There are parts of the world in which its widespread application has not been accompanied by a fall in death rates, and parts of the world Where death rates have fallen without it having been applied. It is at this point that goalposts tend to become nomadic: to explain the former phenomenon it is said that death rates would have risen without the test, while in the latter case it is said that the natural trend downwards would have been accelerated if the test had been used. hi any case, the argument correlating the use of the test with death rates is a

rather crude one: rather like saying that because intelligent men are statistically likely to wear bigger than average shoes, they think with their feet.

If the test Ls of doubtful value, a little reading into its scientific basis will explain why. It is based on scientific premises that have never been substantiated. It is assumed that certain changes in the cells of the uterine cervix are pre-cancerous. This may be correct, but then again may not. However, when the test became available it was at once considered unethical to perform the only experiments that would prove whether or not the assumptions underlying it were justified, namely to follow in a systematic way the women whose tests were considered abnormal. While it is perfectly ethical to demand huge public funds for a test which invades the lives of millions of people, it is unethical to find out whether the test is of value.

There are good prima facie grounds for supposing that the vast majority of cellular changes seen on cervical smears are of no clinical significance whatsoever. The changes are common — occurring in ten per cent of women — but the cancer is rare (of cancer deaths, 1.5 per cent concern the uterine cervix, while 7.9 per cent concern the stomach, 9.6 per cent the breast, 12.5 per cent the large bowel and 26.8 per cent the lung). A simple calculation will show that of 300 abnormal smears only one heralds the development of invasive can- cer. Only one in three of even the' most severe grades of abnormality does so; and it is important to remember that of those one in three the majority would be curable in any case if detected by other means.

Recently the British Medical Journal published an article that casts further doubt on cervical smear testing. Eight pathologists were given the same smears to examine. While agreement between them over severe degrees of abnormality was fair to middling, agreement over the lesser degrees was very poor. Pathologists (according to one of their number) decide on the lesser degrees of abnormality very much as art experts decide whether or not a painting is by Goya. Given the inexor- able growth of the number of operative procedures carried out, this is a not entire- ly reassuring admission. And incidentally, 'If you put the sea to your ear, you can pick up Shell.' several epidemiologists, gynaecologists and pathologists told me that the number of colposcopies performed in an area de- pended to a far greater extent on the private enthusiasms of the gynaecologists in that area than on the objectively estab- lished need of its population.

In summary, then, we have a test that is expensive and time-consuming to perform, that provokes much anxiety, that on the best possible interpretation saves relatively few lives, and that is based on scientific foundations of doubtful solidity, yet has achieved the popular status almost of a shibboleth. The same could almost certain- ly be said of screening for breast cancer and for regular `check-ups'. This is surely a cultural phenomenon of some significance.

The most generous explanation is that the desire to prevent a horrible, if not very common, disease is so great that it hides our inability to do so, despite our vast resources. There is a natural desire to do something, even if that something is point- less, or very nearly so. But of course there are less generous explanations. An indus- try has been created that must justify itself. An eminent cytologist said there had been valuable scientific spin-offs from cervical smear testing, such as cytological testing in other medical fields, but I have to admit that — despite her eminence — the worm of doubt gnawed at my brain: suppose cytological testing in other fields of medi- cine turned out to be of less than over- whelming value also?

The same cytologist, in slightly Thatch- erite vein, supported the test on the grounds that such a preventive measure encouraged awareness among women of their individual responsibility for their own health. Perhaps; or perhaps again it prom- oted the idea that omnicompetent author- ities were responsible for everything. How many women in our semi-literate society will fail to be intimidated by a compute- rised demand that they visit their doctor for the test? And how long before a woman sues a doctor or a health authority for negligence because she failed to receive such a demand and subsequently de- veloped cancer? Furthermore, my experi- ence of the 'caring professions' leads me to suppose they will not be able easily to resist such a opportunity to invade in the most literal physical sense the lives of a third of the population, potential victims all.

In the light of an article last month in the Lancet by Professor McCormick in which he concludes that 'there is no evidence that [cervical] screening is beneficial, and it may well be doing more harm than good', I am undecided whether the Government should issue all doctors with feathered head-dresses and daily supplies of chicken gizzards to cast upon the floors of their consulting rooms, as an ancient, Impress- ive, cheap and accurate form of divination, or whether I should issue a clarion call to further reseach — requiring, of course, more government funds.