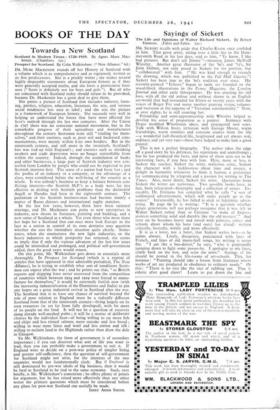 Towards a New Scotland

DR. MURE MACKENZIE rounds off her History of Scotland with a volume which is as comprehensive and as vigorously written as its five predecessors. She is a prickly writer ; she makes several highly disputable statements about European history as if they were generally accepted truths, and she loves a provocative foot- note (" Scott is definitely not for boys and girls "). But all who are concerned with Scotland today should refuse to be provoked, because Dr. Mackenzie has a great deal to give them.

She paints a picture of Scotland that includes industry, farm- ing, politics, religion, education, literature, the arts, and various social tendencies less easy to label ; and she sets the picture in a framework of European history. She succeeds very well in helping us understand the forces that have most affected the Scot's outlook through the last two centuries. After the Union in 1707 there was no conscious national movement, but in the remarkable progress of their agriculture and manufactures throughout the century Scotsmen were still " fending for them- selves," and their enemies, such as poor soil and backward com- munications, were mainly within tf eir own borders. But in the nineteenth century, and still more' in the twentieth, Scotland's fate was tied up with England's ; and enemies such as shrinking markets and trade depression were no longer controllable from within the country. Indeed, through the assimilation of banks and other businesses, a large part of Scottish industry was con- trolled from London by people who could not be expected to put Scottish interests first. The sense of a nation had been lost ; and the profits of an industry or a company, or the advantage of a class, were considered before the well-being of the country as a whole. It was nobody's business to keep a balance between con- flicting interests—the Scottish M.P.'s as a body were far less effective in dealing with Scottish problems than the dictatorial Argyll or Dundas had been in the eighteenth century. The patriotism of the Scottish business-man had become mainly a matter of Burns dinners and international rugby matches.

In the last few years, however, there have been national stirrings, and Dr. Mackenzie can point to new enterprises in industry, new shoots in literature, painting and building, and a new sense of Scotland as a whole. Yet even those who most share her hope for a Scotland that can once more look Europe in the face as a nation in control of its own destinies may question whether she sees the immediate situation quite clearly. Some- times, when she enumerates the new light industries, or the heavy industries to which prosperity has returned, she seems to imply that if only the various advances of the last few years could be intensified and prolonged, and political self-government added, then the good years would return.

On this point, Mr. Walkinshaw gets down to essentials more thoroughly. In Prospect for Scotland (which is a reprint of articles that have appeared in that admirable periodical, The New Alliance), he is trying to establish what sort of conditions Scots- men can expect after the war ; and he points out that, " as British exports and shipping have never recovered from the competition of countries which between 1914 and 1919 were forced to manu- facture for themselves," it would be extremely foolish now (with the increasing industrialisation of the Dominions and India) to pin any hopes on a great industrial revival in Scotland after the war. The Scotland that is to have any chance of survival beyond the role of poor relation to England must be a radically different Scotland from that of the nineteenth century—living largely on its own resources (as yet far from fully developed), with far more of its people on the land. It will not be a question of recovery along already well-marked paths ; it will be a matter of deliberate choices by the individual Scot—of being willing to eat more fish and chips and less tinned salmon, more oatcake and less bread ; willing to wear more linen and wool and less cotton and silk ; willing to reclaim land in the Highlands rather than draw the dole in Glasgow.

To Mr. Walkinshaw, the form of government is of secondary importance ; if you can discover what sort of life you want to lead, then you can probably make a government to suit it. If England were to decide on a post-war policy of simpler living and greater self-sufficiency, then the question of self-government for Scotland might not arise, for the interests of the two countries would not fundamentally clash. But if England is still dominated by pre-war ideals of big business, then it would be fatal to Scotland to be tied to the same economy. Such, very briefly, is Mr. Walkinshaw's contention ; he offers plenty of points for argument, but he has raised more effectively than any other writer the primary questions which must be considered before any plans for post-war Scotland can usefully be made.