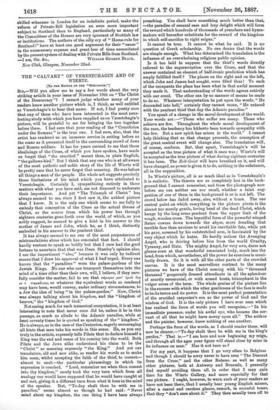 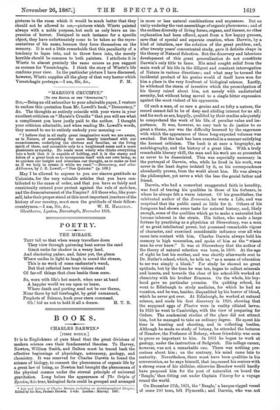 THE "CALVARY" OF VERESTCHA.GIN AND OF WIERTZ.

pro Tax Items or vas narsonsos..1 fka,—Will you allow me to say a few words about the very striking article in your issue of November 19th on " The Christ of the Democracy "? I cannot judge whether many of your readers know another picture which is, I think, as well entitled as Verestchagin's to bear that name. If not, I feel pretty sure that any of them who have been interested in the most pene- trating study with which you have supplied us on Verestchagin's picture, will be grateful to me for bringing the two together before them. I feel sure that your reading of the " Crucifixion under the Romans " is the true one. I feel sure, also, that the artist has rendered us an immense service in setting before us the scene as it presented itself to the surrounding crowd of Jews and Roman soldiers. It has for years seemed to me that those idealisings of the Cross, of which you have spoken, have made us forget that "the crucified " meant then, in plain English, " the gallows-bird." But I think that any one who is at all aware of the moat pathetic and noble story of the life of Wiertz will be pretty sure that he never forgot that meaning. He was before all things a man of the people. His whole art suggests precisely those limitations of his mind which you have attributed to Vereetchagin. Certainly I, sympathising entirely in those matters with what you have said, am not disposed to underrate their importance. And yet "The Triumph of Christ" has always seemed to me, since I first saw it, the noblest picture that I know. It is the only one which seems to me fully to embody that conception of the Cross as the actual throne of Christ, as the source from which his power has through eighteen centuries gone forth over the world, of which, as you nobly suggest, he seemed to give a hint in his answer to the mother of James and John, which he, as I think, distinctly embodied in his answer to the penitent thief.

It has always seemed to me one of the most preposterous of mistranslation alone which has concealed that fact. I should hardly venture to speak so boldly but that I once had the good fortune to ascertain that that was Dean Stanley's opinion also. I use the impertinent "also," because it was only by indirect means that I drew his approval of what I hacrurged. Every one knows that the " paradises" were the palace.gardens of the Jewish Kings. No one who can transport themselves into the mind of a time other than their own, will, I believe, if they care- fully consider the matter, fail to see that oiptpoy per' 4coit ie Er z aapaittorg, or whatever the equivalent words so rendered may have been, would convey, under ordinary circumstances, to a Jew the idea of being " in the palace-garden." Now, Christ was always talking about his kingdom, and the "kingdom of heaven," the " kingdom of God."

Not caring much for such numerical computation, it is at least interesting to note that never once did he, unless it be in this passage, so much as allude to the Adamie paradise, while at least seventy times he is quoted as speaking of the " kingdom." He is always, as in the case of the Centurion, eagerly encouraging all hints that men take his words in this sense. He, as you say truly in the article, expressly tells Pilate that to declare himself a Mn. g was the end and cause of his coming into the world. Both Pilate and the Jews alike understood his claim to be the "Christ" as meaning expressly "the King." And yet our translators, old and new alike, so render his words as to make him seem, whilst accepting the faith of the thief, to correct— almost to snub—the particular phraseology in which its expression is couched. " Lord, remember me when thou comeat into thy kingdom," surely took the very turn which from all analogy one would have supposed that he would have caught at and met, giving it a different turn from what it bore in the mind of the speaker. But, "To-day shalt thou be with me in paradise," seems almost as though he had said : "Never mind about my kingdom, the one thing I have been always

preaching. You shall have something much better than that, —the paradise of sensual ease and lazy delight which will form the reward which hundreds of thousands of preachers and hymn- makers will hereafter substitute for the reward of the kingdom in which self-sacrifice to right reigns."

It cannot be true. It cannot be what he said. It is no question of Greek scholarship. No one denies that the words are simple enough. What has determined the translation is the influence of an overwhelming religious public opinion.

Is it too bold to suppose that the thief's words directly referred to the superscription over the Cross, and that the answer contained an element of half-ironic prediction which has. amply fulfilled itself ? The places on the right and on the left, which John and James had sought, were filled thus 1 To each of the occupants the place has been what in that awful moment they made it. That understanding of the words agrees entirely with our creed. The other can by no manner of means be made to do so. Whatever interpretation be put upon the words, " He descended into hell," certainly they cannot mean, " He entered with the penitent thief that day the Adamic paradise."

Yon, speak of a change in the moral development of the world. Your words are :—" Those who suffer are many. Those who achieve are few. Throughout the whole moral development of the race, the tendency has hitherto been towards sympathy with the few. But a new spirit has arisen in the world." I cannot help thinking that as that change proceeds, the conception of the great central event will change also. The translators will, of course, conform. But, that apart, Verestchagin's will be accepted as the true picture of what it once was ; Wiertz's will be accepted as the true picture of what during eighteen centuries it has been. The Zeit-Geist will have breathed on it, and will have changed, as power is given it to do, nothing in the substance, all in the supposition.

In Wiertz's picture, all is as much ideal as in Verestchagin's it is realistic. The thieves are so completely lost in the back- ground that I cannot remember, and from the photograph now before me can neither see nor recall, whether a faint sug- gestion of one of them in the background is or is not left. The crowd below has faded away, also, without a trace. The one central point on which everything in the picture pivots is the almost too merely gentle, loving head of the dead Christ, which hangs by the long arms pendent from the upper limb of the rough, wooden cross. The beautiful form of the powerful winged Satan cowers down towards the abyss, more dreading that terrible face than anxious to avoid his inevitable fate, while yet his gaze, screened by his outstretched arm, is fascinated by the very object which he hates. He hardly notices the Avenging Angel, who is driving before him from the world Cruelty, Tyranny, and Hate. The mighty Angel, for very awe, dares not glance even at that wonderful emaciated body, much less the head, from which, nevertheless, all the power he exercises is mani- festly drawn. So it is with all the other parts of the crowded canvas. It is the most marvellous contrast to the many pictures we have of the Christ coming with his "thousand thousand " gorgeously dressed attendants in all the splendour of courtly ceremonial, or with armed hosts, triumphant in the vulgar sense of the term. The whole genius of the picture lies in the success with which the utter gentleness of the face is made to be its terror and its power. It is the most perfect presentation of the crucified carpenter's son as the power of God and the wisdom of God. It is the only picture I have ever seen which has realised the force of words you will recognise,—" In his immediate presence, under his awful eye, who became the ser- vant of all that he might have mercy upon all." The author and the painter, however, knew nothing of one another.

Perhaps the force of the words, as I should render them, will now be clearer,—"To.day shalt thou be with me in the king's garden." That is,—"I am here and now beginning my reign, and through all the ages your figure will stand close by mine in its influence on man." Has it not been so ?

For my part, it happens that I go very often to Belgium and though I should be sorry never to have seen "The Descent from the Cross," and the other Rations, as well as many other pictures, both at Antwerp and Brussels, I generally find myself avoiding them all, in order that I may gain time for the Wiertz Gallery, and more especially for that one picture. I ought, however, to warn such of your readers as have not been there, that I usually hear young English misses, after a casual and careless glance, remark, in scornful tones, that they "don't care about it." They then usually turn off to pictures in the room which it would be much better that they should not be allowed to see,—pictures which Wiertz painted always with a noble purpose, but such as only leave an im- pression of horror. Designed in each instance for a specific object, they have unfortunately come to be taken as the repre- sentatives of his name, because they force themselves on the memory. It is not a little remarkable that this peculiarity of a tendency to lapse into, and to throw force into, the merely horrible should be common to both painters. I attribute it in Wiertz to almost precisely the same causes as you suggest as excuses for Verestchagin. I think the story of Wiertz's life confirms your view. In the particular picture I have discussed, however, Wiertz supplies all the glory of that very horror which Verestchagin portrays.—I am, Sir, &c., F. M.