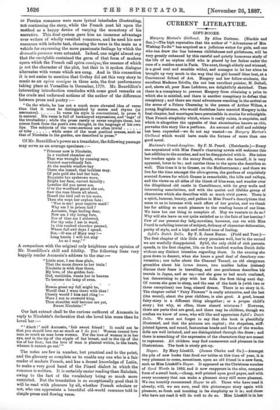 Margery Merton's Girlhood. By Alice Corkran. (Blackie and Son.)—The high reputation that the author of "Adventures of Mrs Wishing-To-Be" has acquired as a judicious writer for girls, and one who can draw the line between childishness and girlishness, will be very greatly enhanced by this careful and quietly humorous study of the life of an orphan child who is placed by her father under the care of a maiden aunt in Paris. The aunt, though elderly and wizened, is a good soul and sensible withal, and manages to let her niece be brought up very much in the way that the girl herself likes best, at a Conventual School of Art. Margery and her fellow-atadents, the excellent Madame Bfiville, the not leas excellent painter, M. Delta, and, above all, poor Bose Lefebvre, are delightfully sketched. Then there is a conspiracy to prevent Margery from obtaining a prize to which she is entitled, and there is another conspiracy to defeat that conspiracy ; and there are rural adventures resulting in the arrival on the scene of a Prince Charming in the person of Arthur Wilton, a young Englishman, who would doubtless have married Margery in the final chapter, had marriages been permissible in stories' for schoolgirls. That French simplicity which, where it really exists, is exquisite, and which is altogether the opposite of that abomination known as chic, pervades this story like a perfume. An amount of skill and subtlety has been expended—we do not say wasted—on Margery Merton's Girlhood which would have made the fortune of more than one good novel.