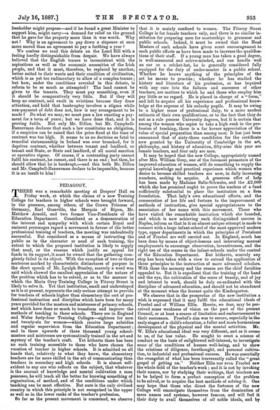 THERE was a remarkable meeting at Drapers' Hall on Friday week, at which the claims of a new Training College for teachers in higher schools were brought forward, in the presence, among others, of the Crown Princess of Germany, Earl Granville, the Marquis of Ripon, Mr. Matthew Arnold, and two former Vice-Presidents of the Education Department. Considered as a demonstration of the interest and sympathy with which certain Royal and eminent personages regard a movement in favour of the better professional training of teachers, the meeting was undoubtedly successful. But considered as a means of instructing the public as to the character or need of such training, the extent to which the proposed institution is likely to supply that need, or the reasons which justify an appeal for funds in its support, it must be owned that the gathering com- pletely failed in its object. With the exception of two or three sentences marked by characteristic distinctness of purpose in the short speech of Mr. Lyulph Stanley, scarcely a word was said which showed the smallest appreciation of the nature of the problem which has to be solved, or as to the manner in which the Maria Grey Training College in Fitzroy Street is likely to solve it. Yet that institution, small and undeveloped as it is at present, represents the only serious attempt to provide for teachers of schools higher than elementary the sort of pro- fessional instruction and discipline which have been for many years provided for the masters and mistresses of primary schools, and which have done so much to transform and improve the methods of teaching in those schools. There are in England and Wales forty-four Training Colleges—eighteen for men and twenty-six for women—which receive large subsidies and regular supervision from the Education Department ; and in these upwards of three thousand young school- masters and mistresses are systematically trained in the art and mystery of the teacher's craft. Yet hitherto there has been no such training accessible to those who have chosen the vocation of teacher in higher schools. It is admitted on all hands that, relatively to what they know, the elementary teachers are far more skilled in the art of communicating than teachers in secondary and high schools. It is almost self- evident to any one who reflects on the subject, that whatever is the amount of knowledge and mental cultivation a man possesses, he will teach all the better for knowing something of organisation, of method, and of the conditions under which teaching can be most effective. But ours is the only civilised country in which this principle is not recognised in the upper as well as in the lower ranks of the teacher's profession.

So far as the present movement is concerned, we observe that it is mainly confined to women. The Fitzroy Street College is for female teachers only, and there is no similar in- stitution for preparing men for masterships in grammar and public schools. Indeed, it must be owned that the Head Masters of such schools have given scant encouragement to such public efforts as have been made to increase the qualifica- tions of their staff. If a young man has taken a good degree, is well-mannered and active-minded, and can handle well an oar or a cricket-bat, he is generally considered fully equipped for the duty of under-master in a public school. Whether he knows anything of the principles of the art he means to practise ; whether he has studied the history and literature of his profession, or has inquired with any care into the failures and successes of other teachers, are matters to which he and those who employ him pay little or no regard. He is placed in charge of a "form," and left to acquire all his experience and professional know- ledge at the expense of his unlucky pupils. It may be owing to a higher sense of professional duty, to a more modest estimate of their own qualifications, or to the fact that they do not as a rule possess University degrees, but it is certain that among the women who aspire to take a high rank in the pro- fession of teaching, there is a far keener appreciation of the value of special preparation than among men. It has just been announced that of sixty-three candidates for the certificate now granted by the University of Cambridge in the art, philosophy, and history of education, fifty-nine this year are female teachers, and four only are men.

It may be hoped that the new College, appropriately named after Mrs. William Grey, one of the foremost promoters of the improved education of women, will do something to supply the special knowledge and practical experience which women who desire to become skilled teachers are now, in daily increasing numbers, seeking to acquire. A generous offer of help has been made by Madame Salis-Schwabe, and the £2,000 which she has promised ought to prove the nucleus of a fund sufficiently substantial to place the institution on a firm foundation. That lady's own educational efforts, and the consecration of her life and fortune to the improvement of methods of instruction, give special appropriateness to the association of her name with this movement. Those who have visited the remarkable institution which she founded, and which is now achieving such distinguished success in Naples, inform us that in it an almost unique attempt is made to connect with a large infant-school of the most approved modern type, upper departments in which the principles of Pestalozzi and of Froebel are well carried out. In England, much has been done by means of object-lessons and interesting manual employments to encourage observation, inventiveness, and the right use of the senses in the infant-schools under the control of the Education Department. But hitherto, scarcely any step has been taken with a view to extend the application of those principles to the instruction of more advanced scholars. With these the memory and the reason are the chief faculties appealed to. But it is expedient that the training of the hand and the eye, the cultivation of the sense of beauty, and of joy and interest in work, should be duly co-ordinated with the discipline of advanced education, and should not be abandoned at the moment when the learner quits the Kindergarten.

We observe that in the prospectus of the new institution a wish is expressed that it may fulfil the educational ideals of Froebel and of William Ellis. Herein, we fear, may be per- ceived some weakness of vision on the part of the present Council, or at least a source of limitation and embarrassment to their successors. Froebel's aim was to secure, especially in the early stages of a child's education, a fuller and more harmonious development of the physical and the mental activities. Mr. W. Ellis's educational ideal was very different, and as it seems to no, of far less value. He sought to erect a science of conduct on the basis of enlightened self-interest, to investigate some of the conditions of human well-being, and to show the relations of diligence, forethought, and personal cultiva- tion, to industrial and professional success. He was essentially the evangelist of what has been irreverently called the "great gospel of getting on." Neither Ellis nor even Froebel saw

the whole field of the teacher's work ; and it is not by invoking their names, nor by studying their writings, that teachers are to be helped to form a perfect conception of the problem to be solved, or to acquire the best methods of solving it. One may hope that those who direct the fortunes of the new College will emancipate themselves from the domination of mere names and systems, however famous, and will feel it their duty to avail themselves of ail noble ideals, and by