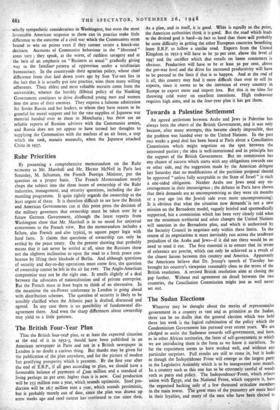 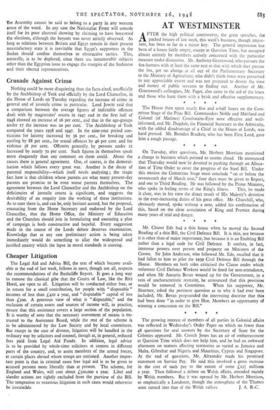 Whatever may be thought about the merits of representative government in a country as vast and as primitive As the Sudan, there can be no dotibt that the general election which was held there last week is the logical culmination of the policy which the Condominium Government has pursued over recent years. We are pledged to assist the Sudanese towards self-government, and here, as in other African territories, the form of self-government to which we are introducing them is the form as we know it ourselves. So far the experiment seems to have worked well, and without any particular surprises. Full results are still to come in, but it looks as though the Indepdridence Front will emerge as the largest party in the Legislative Assembly which is to be inaugurated next month. In a country such as this one has to be extremely careful of words such as party and policy. The IndependencesFront, which rejects union with Egypt, and the National Front, which supports it, have the organised backing only of a few thousand articulate members in the main towns. The great mass of the peasantry are more local in their loyalties, and many of the men who have been elected tc

the Assembly cannot be said to belong to a party in any western sense of the word. In any case the Nationalist Front will console itself for its poor electoral showing by claiming to have boycotted the elections, although the boycott was never strictly observed. As long as relations between Britain and Egypt remain in their present unsatisfactory state it is inevitable that Egypt's supporters in the Sudan should confine themselves to obstructive tactics. This, naturally, is to be deplored, since there are innumerable subjects other than the Egyptian issue to engage the energies of the Sudanese and their elected representatives.