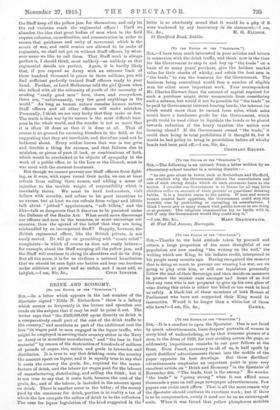 [To THE EDITOR or THE "arms...roe:1 SIR,—The following is an

extract from a letter written by an elementary-school teacher in a ruining district:— "As one goes about in towns such as Rotherham and Sheffield. one wonders why the Government allows the manufacture and sale of such strong drinks which do such enormous harm to the nation. I consider our Government is to blame for all that little children suffer on account of their parents' or guardians' drinking habits. It is a terrible curse to the nation. If men and women cannot control their appetites, the Government could stop this horrible vice by prohibiting or curtailing its manufacture. I think I never saw so many women visit public-houses as are doing so at present. The religious communities try to battle with it, but if only the Government would they could stop it."

—I am, Sir, Joss Mesa BRAITHWAITE.