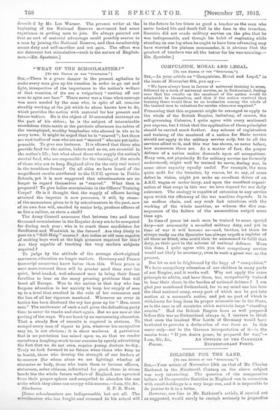 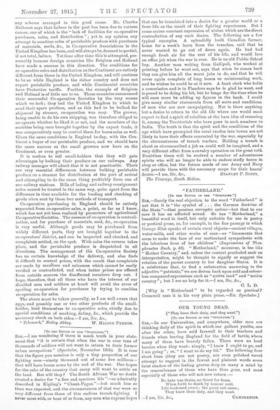 SOLDIERS FOR THE LAND.

[To THE EDITOR or THE "SrscTnroa.•,l

Sut,—Your article of November 13th on that of Mr. Charles Bathurst in the Nineteenth Century on the above subject was very interesting. The question of the comparative failure of Co-operative Societies in England run in connexion with small-holdings is a very large one, and it is impossible to do justice to it in a letter.

However, one line in Mr. Batliurst's article, if carried out as suggested, would surely be enough seriously to jeopardize

any scheme arranged in this good cause. Mr. Charles Bathurst says that failure in the past has been duo to various causes, one of which is the " lack of facilities for co-operative purchases, sales, and distribution " ; yet in my opinion any attempt to combine sales of perishable produce with purchases of materials, seeds, &c., in Co-operative Associations in the United Kingdom has been, and will always be, doomed to partial, if not total, failure. Yet time after time this is attempted, pre- sumably because foreign countries like Belgium and Holland have made a success in this direction. The conditions for co-operative sales and distribution on the Continent are entirely different from those in the United Kingdom, and will continue to be so while England is the richer country and does not export perishable produce, and while Continental countries have Protective tariffs. Further, the example of Belgium and Holland is of little use to us. These countries commenced their successful Co-operative Societies by the very means which we lack; they had the United Kingdom to which to send their spare produce, and as this had to be bulked for shipment by steamer, co-operation was easy. The grower, being unable to do his own shipping, was therefore obliged to co-operate whether he liked it or not, and the members of the societies being once brought together by the export trade, it was comparatively easy to control them for home sales as well. Given the same conditions in England to-day, with the Con- tinent a buyer of our perishable produce, and we should have the same success as the small growers now have on the Continent, or even greater.

It is useless to tell small-holders that they will gain advantages by bulking their produce on our railways. Any railway manager will admit that it is not practicable. There are very essential differences between bulking perishable produce on a steamer for distribution at the port of arrival and attempting to do the same thing profitably from one of our railway stations. Bills of lading and railway consignment notes cannot be treated in the same way, quite apart from the difference in time available for the loading and oheoking of goods when sent by these two methods of transport.

Co-operative purchasing in England should be entirely separated from co-operative sales, a point, as far as I know, which has not yet been realized by promoters of agricultural Co-operative Societies. The essence of co-operation is centrali- zation, and for purchase of materials, seed, &o,, co-operation is very useful. Although goods may be purchased from widely different parts, they are brought together to the co-operators' district, and can be inspected and checked, and complaints settled, on the spot. With sales the reverse takes place, and the perishable produce is despatched in all directions. The management of the Co-operative Society has no certain knowledge of the delivery, and also finds it difficult to control prices, with the result that complaints are made by members and salesmen which cannot be easily verified or contradicted, and when better prices are offered from outside sources the disaffected members drop out. I hope, therefore, that all those who have the interest of our disabled men and soldiers at heart will avoid the error of spoiling oo-operation for purchases by trying to combine co-operation for sales. • The above must be taken generally, as I am well aware that eggs, and possibly one or two other products of the small- holder, lend themselves to co-operative sales, chiefly due to special conditions of marking, dating, &c., which provide the necessary check on both eides.—I am, Sir, &c.,