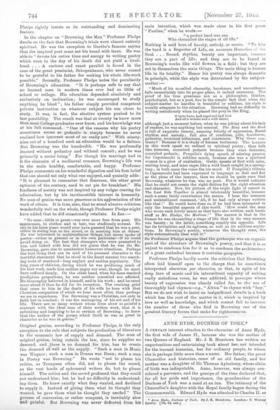 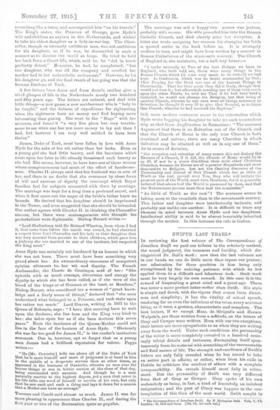 A CERTAIN interest attaches to the character of Anne Hyde, the first wife of James II., because she was the mother of two Queens of England. Mr. J. R. Henslowe has written an unpretentious and entertaining book about her, not intended for the learned historian, but for ordinary people, to whom she is perhaps little more than a name. Her father, the great Chancellor and historian, came of an old family, and her mother was a daughter of Sir Thomas Aylesbury; whose claim of birth was indisputable. Anne, however, was always con- sidered a parvenue, and the gossips of the time declared that, for all her pride and importance, the grandmother of the Duchess of York was a maid at an inn. The intimacy of the Chancellor's daughter with the Royal family began during the Commonwealth. . Edward Hyde was attached to Charles II. as * dune Thuds. 1)4414400 of York. By J, B. Renslowe, London: T. Werner' Laurie, clue. 6d, net,'

something like a tutor, and accompanied him "on his travels." The King's sister, the Princess of Orange, gave Hyde's wife andchildren an asylum in the Netherlands, and wished to take his eldest daughter as a lady-in-waiting. The Chan-

cellor, though 'in intensely ambitious man, was not ambitious for his daughter, or, if he was, he dissembled in such a manner as to deceive the world' at large. He tried to bold her back from a Court life, which, said he, he "did in truth perfectly detest." Moreover, ho had, he complained, "but one daughter, who was all the company and comfort her mother had in her melancholic retirement." However, be let his daughter go, and the final result of her going was that she became Duchess of York.

A few letters from Anne and from Anne's mother give a vivid glimpse of life in the Netherlands nearly two hundred itnd fifty years ago. The letters are natural, and deal with little things—a new game, a new maidservant who is " holy to be tought," and the dulness of expeditions for sightseeing when the sightseers have no money and find buying more interesting than gazing. She went to the " Rage" with her mistress, and found it "a very fine place but very trouble- some to see when one has noe more money to lay out than I had, but however 1 am very well eatified to have been theire."

James, Duke of York, must have fallen in love with Anne Hyde for the sake of her wit rather than her looks. Even as a young girl she bad little beauty, and the heaviness which came upon her later in life already threatened such beauty as she had. She seems, however, to have been one of those women whose conspicuousness bad much of the effect of handsome- ness. Charles II. always said that her husband was in awe of her, and there is no doubt that she overcame by sheer force of will and exercise of dignity the contempt which Royal families feel for subjects connected with them by marriage. The marriage was kept for a long time a profound secret, and when it first came out the anger of the bride's father knew no bounds. He desired that his daughter should be imprisoned in the Tower, and even suggested that she should be beheaded Our author agrees with Charles II.. in thinking the Chancellor sincere, but there were contemporaries who thought his protestations were diplomatic. Bishop Burnet writes :-

"Lord Shaftesbury told Sir Richard Wharton, from whom I had it, that some time before the match was owned, he had observed a respect from Lord Clarendon and his lady to their daughter that was very unusual from parents to their children, which gave him a jealousy she was married to one of the brothers, but suspected the King most."

Anne Hyde was certainly not burdened by an honour to which she was not born. There must have been something very grand about her. An extraordinary consensus of competent opinion witnesses to. her wit and dignity. The French Ambassador, the Comte de Cominges, said of her: "She upholds with as much courage, cleverness and energy the dignity to which she has been called, as if she were of the blood of the kings or of Guzman at the least, or Mendoza." Bishop Burnet, who considered her a woman of "great know. ledge and a lively sense of things," declared that "she soon understood what belonged to a Princess, and took state upon her rather too much." Lord Craven, writing in 1661 to the Queen of Bohemia, says " 1 have this morning been to wait upon the duchess; abe lies here and the King very kind to her: she takes upon her as if she been duchess this seven years." Even the insolence of the Queen-Mother could not live in the face of the hauteur of Anne Hyde. " Obviously abe was far too good for James II.," is the reader's instinctive comment. One is, however, apt to forget that as a young man James had a brilliant reputation for valour. Pepys writes :—

"He [Mr. Coventry] tells me above all of the Duke of York that he is more himself and more of judgment is at hand in him in the middle of a desperate service than at other times, as appeared in the business of Dunkirko, wherein no man ever did braver things or was in hotter service at the close of that day, being surrounded with enemies. And though he is a man naturally martial to the highest degree, yet a man that never in his life take one word of himself or service of his own, but only that he saw such and such a thing and lays it down for a maxim that a Hector can have no courage."

Turenne and Conde said almost as much. James IL was far More pleasing in appearance than Charles IL, and during the first year or two of the Restoration quite as popular.

The marriage was not a happrone. dames was jealous, probably with reason. His wife preceded him into the Roman Catholic Church, and died shortly after her reception. A letter she wrote assigning her reasons for changing her faith is quoted entire in the book before us. It is strangely modern in tone, and might have been written by a convert to Roman Catholicism of the nineteenth century. The Church of England is, she maintains, but a half-way house :—

"I spoke severally to Two of the best Bishops we have in England, who both told me, them were many things in the Roman Church which (it worn vary much to be wished) we had kept. As Confession, which was no doubt commanded by God ; That Praying for the Dead was one of the Ancient Things in Christianity. That for their parts they did it Daily, though they would not own it ; but afterwards pressing one of them very much upon the other Pointe, he told me That if he had been bred a Catholick he would not change his Religion, but that being of another Church, wherein he was sure were all things necessary to Salvation, he thought it very ill to give that Scandal, as to leave that Church, wherein he had received his Baptism."

Still more modern sentences occur in the exhortation which Hyde wrote begging his daughter to take no such tremendous step as that from Anglicanism to Romanian': " The common Argument that there is no Salvation out of the Church and that the Church of Rome is the only true Church is both irrational and untrue ; there are many Churches in which Salvation may be attained as well as in any one of them."

As to errors of doctrine, "the reception and retention of many errors do's not destroy the Essence of a Church, if it did, the Church of Rome would be in as ill, if not in a worse Condition than most other Christian Churches, because its Errors are of a greater Magnitude and more destructive to Religion. Let not the Canting discourse of the Universality and Extent of that Church which has as little of Truth as the rest, prevail over You, they who will imitate the greatest part of the World, must turn Heathens, for it is generally believed that above half the World is possessed by them, and that the Mahometans possess more than half the remainder."

" As little of Truth as the rest"! The sentence seems to belong more to the twentieth than to the seventeenth century. This father and daughter were intellectually intimate, and probably not unlike one another. It is difficult to trace any likeness in mind between Anne Hyde and her daughters. Intellectual ability is said to be almost invariably inherited through the mother. In this instance the rule is broken.