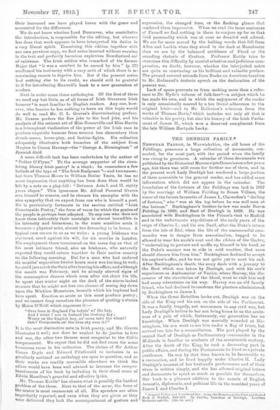 NEWNHkid PADD0X, in Warwickshire, the old home of the Feildings, possesses a large collection of documents, con- nected, for the most part, with the period when the family was rising to greatness. A calendar of these documents was published by the Historical Manuscripts Commission slew years ago, but there was still room for further use of them, and in the present work Lady Denbigh has rendered a large portion of them accessible to the general reader, and bas added some information which did not appear in the' calendar. The foundation of the fortunes of the Feildings was laid in 1607 by the marriage of William Feilding to Susan Villiers, the sister of the future favourite of James I., Clarendon's " darling of fortune," who " was at the top before he was well seen at the bottom." Buckingham's brother-in-law was made Baron Feilding in 7620, and Earl of Denbigh in 1622. He was associated with Buckingham in the Prince's visit to Madrid and in the unfortunate expeditions of the early years of the reign of Charles I.; and his son Basil, after the Duke's return from the isle of Rlie, when the life of the unsuccessful com- mander was in danger from assassination, begged to be allowed to wear his uncle's coat and the ribbon of the Garter, "undertaking to gesture and muffie up himself in his hood, as the Duke's manner was to ride in cold weather, that none should discern him from him." Buckingham declined to accept his nephew's offer, and he was not quite jet to meet his end. After Buckingham's 'death, the story deals with a journey to the East which was taken by Denbigh, and with his son's experiences as Ambassador at Venice, where Harvey, the dis- coverer of the circulation of the blood, went to visit him and had many adventures on his way. Harvey was an old family friend, who had declined to condemn the plasters administered by Buckingham to James I.

When the Great Rebellion broke out, Denbigh was on the aide of the King and his son on the side of the Parliament. It was a family tragedy, not uncommon in any civil war, but Lady Denbigh's letters to her son bring home to us the acute- ness of a pain of which, fortunately, our generation has no knowledge. When Denbigh was mortally Wounded at Bir- mingham, his son went to see him under a flag of truce, but arrived too late for a reconciliation. The part played by the second Earl of Denbigh as Parliamentary commander in the Midlands is familiar to students of the seventeenth century. After the death of the King, he took a decreasing part in public affairs, and during the Protectorate he lived as a private eentleman. He was by that time known to be favourable to a restoration, and lie lived happily under Charles II. Lady Denbigh's account of her husband's predecessors and of their wives is written simply, and she has allowed original letters and documents to speak as much as possible for themselves. Her book is is pleasant addition to the annals of English domestic, diplomatic, and political life in the troubled years of James I. and Charles L