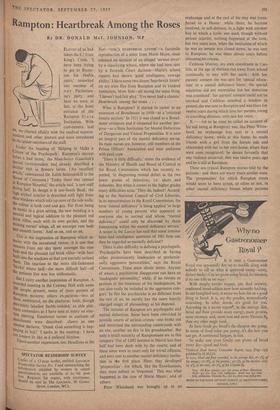 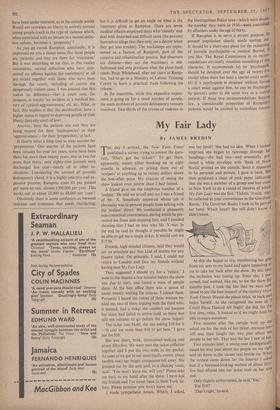 Rampton: Heartbreak Among the Roses

By DR. DONALD Mei. JOHNSON, MP ELEVEN of us had taken the 8.5 from King's Cross. 'I have been trying to get to Ramp- ton for twelve years,' remarked one member of o u r Parliamen- tary party; and

at the front re we were, at last, entrance of the

cine-camera laid °n7 we chatted affably with the medical superin- tendent and other doctors and were introduced to the senior members of the staff.

Under the heading of 'Helping to Make a Citizen of the Psychopath ; Rampton's success belies a bad name,' the Manchester Guardian's special correspondent had already described a similar visit in flowery terms. (`An excellent article,' commented Dr. Edith Summerskill in the House of Commons.) 'Today there was opened at }tampion Hospital,' the article said, 'a new staff dining ng hall. In design it is neo-South Bank; the high arched interior is drenched with light from Clear windows which take up most of the side walls; the colour is both cool and gay. Far from being an exotic in a grim setting, the new building is a natural and logical addition to the pleasant red brick villas, each with its own garden, and the existing nurses' wings, all set amongst rose beds and smooth lawns.' And so on, and so on.

This is the impression of Rampton which re- mains with the occasional visitor; it is one that

beds from our day spent amongst the rose ueds and the pleasant red brick villas—with bars built into the windows so that you scarcely noticed ,t,hem. The reaction to the more old-fashioned blocks' where half—the more difficult half--of the Patients live was less enthusiastic.

But I carry another impression of Rampton. A crowded meeting in the Conway Hall with some 400 People present, many of them parents of Rampton patients; others ex-patients—two of them, embittered, on the platform; both, though Previously labelled 'feeble-minded; as able plat- form contenders as I have seen at many an elec- meeting. Emotional scenes as methods of Punishment were described : , cheers as one speaker declares, 'Thank God something is hap- pening at last!' I spoke at the meeting: I have not known its like in a political lifetime.

I have another impression, too. Headlines in the

Star—`GIRL'S HEARTBREAK LETTER'—a facsimile reproduction of a letter from Marie Mayo, since released on account of an alleged 'serious error' by a classifying school, where she had been sent by a Juvenile Court decision—Marie's school reports had shown 'good intelligence, average ability.' I have some two dozen 'heartbreak letters' on my own tiles from Rampton and its kindred institution, Moss Side—all saying the saine thing. `I haven't had fair play.' I've never had a chance.' Heartbreak among the roses. . . . .

What is Rampton? It started its career as an extension of Broadmoor in 1910—as a 'criminal lunatic asylum.' In 1921 it was closed as a Broad- moor extension and it reopened for another pur- pose—as a State Institution for Mental Defectives of Dangerous and Violent Propensities. It is now an integral part of the mental deficiency set-up. Its male nurses are, however, still members of the Prison Officers' Association and wear uniforms with peak caps.

`There is little difficulty,' states the evidence of the Ministry of Health and Board of Control to the Royal Commission which has recently re- ported, in diagnosing mental defect in the two lower grades of defectives, i.e. idiots and imbeciles. But When it comes to the higher grades many difficulties arise.' They do, indeed ! Accord- ing to the National Council of Civil Liberties, in its memorandum to the Royal Commission, the term 'mental deficiency' is being applied `to large numbers of young persons who appeared to everyone else as normal and whose "mental deficiency" could only be discerned by those functioning within the mental deficiency service.' A writer in the Lancet has said that some inmates have had intelligence quotients of 100; how can they be regarded as mentally deficient?

There is also difficulty in defining a psychopath. `Psychopaths have been described as haying either predominantly inadequate or predomin- antly aggressive personalities,' says the Royal Commission. These seem elastic terms. Anyone of whom a psychiatrist disapproves can have an `inadequate personality,' while, if he resents or protests at the treatment of his inadequacies, he can also easily be included in the aggressive cate- gory. In this the psychiatrist is no different from the rest of us; he merely has the more heavily charged magic of phraseology at his disposal.

The inmates of Rampton are psychopaths and mental defectives. Some have been convicted in juvenile courts of serious crimes—one broke out and terrorised the surrounding countryside with an axe, another set fire to his grandmother. But only a small minority of Ramptonians are in this category. Out of 1,092 inmates in March less than half had been dealt with by the courts; and of these some were in court only for trivial offences, and were sent to another mental deficiency institu- tion in tlqe first place. Here, they developed `propensities'—for which, like the Erewhonians, they must submit to 'treatment.' This was what happened in the case of Marie Mayo : and of others.

Peter Whitehead was brought up in an orphanage and at the end of his stay was trans- ferred to a Home: while there, he became involved, in self-defence, in a fight with another boy in which a knife was used, though without serious injuries; nothing happened at the time, but two years later, when the institution of which he was an inmate was closed down, he was sent to Rampton; he was there eleven years before obtaining his release.

Cathlene Murray, my own constituent in Car- lisle, at the age of thirteen ran away from school continually to stay with her uncle : with her parents' consent she was sent for 'special educa- tion' to a mental deficiency hiame; the special education did not materialise but her detention was continued : her parents' consent could not be revoked and Cathlene smashed a window in protest; she was sent to Rampton and was there for twelve years during which time her parents, owing to travelling distance, only saw her twice.

X (or so he must be called on account of his still being at Rampton) was, like Peter White- head, an orphanage boy sent to a mental deficiency home; while at this home, he made friends with a girl from the female side and absconded with her to her own home, where they were soon recaptured; he denies fervently that any violence occurred; that was twelve years ago and he is still at Rampton.

These are typical Rampton stories told by the patients: and there are many more similar ones. The 'propensities' for which Rampton treats would seem to have arisen, as often as not, in other mental deficiency homes where patients have been under restraint, as in the outside world. Would not restraints on liberty in entirely normal young people result in the type of violence which, when associated with an inmate in a mental defec- tive colony, becomes a 'propensity'?

As you go round Rampton, admittedly, it is impressed on you a dozen times that these people are 'patients' and they are there for 'treatment.' But it was disturbing to me that, in this motley community, mental defectives who have com- mitted no offence against the community at all are mixed together with those who have been through the courts, including of course the dangerously violent cases. I was assured that this makes no difference—that a court case, for instance, is merely 'an incident in a medical his- tory of cyclical aggressiveness,' etc. etc. What, in fact, this implies is that the psychiatrists have a higher status in regard to depriving people of their liberty than any court of law!

Anyway, here the patients are and they are being treated for their 'inadequacies' or their 'aggressiveness'—for their 'propensities,' in fact.

It clearly takes a long time to treat anyone for 'propensities.' One quarter of the patients have been inmates for over ten years, some have been there for more than twenty years, one or two for more than thirty; only eighty-nine patients were discharged last year—nearly all to other in- stitutions. Considering the amount of juvenile delinquency about, it is a highly selective and ex- pensive process; Rampton costs £9 per patient per week to run; almost £500,000 per year. This works out at about £7,000 to £8,000 per 'cure'!

Obviously there is some confusion as between restraint and treatment that needs, elucidating; but it is difficult to get an angle on what is the treatment given at Rampton. There are seven medical officers employed there who 'classify' and deal with disturbed and difficult cases (the patients themselves allege that they only see a doctor when they get into trouble). The workshops are repre- sented as a feature of Rampton, part of the curative and rehabilitation process. But observers are dubious—they say the machinery is old- fashioned and only produces what the place itself. needs. Peter Whitehead, after ten years at Ramp- ton, had to go to a Ministry of Labour Training Centre to learn a practical trade following his release.

In the meantime, while this expensive experi- ment is going on for a small number of people, the main problem of juvenile delinquency remains unsolved. Two-thirds of the crimes of violence in the Metropolitan Police area—which were doub the number they were in 1938—were committe by offenders under the age of thirty. If Rampton is to serve a proper purpose, its present population clearly needs sorting 00. It should be a short-stay place for the redeeming of juvenile psychopaths—a medical Borstal, if you like. The Royal Commission in its recoil• mendations obviously visualises something of this character. It recommends (a) no 'psychopath' should be detained over the age of twenty-five except when there has been a special court order; (b) if a psychopath is detained without having a court order against him, he can be discharged by parent's order in the same way as a mental patient. If these two recommendations became law, a considerable proportion of Rampton,s patients would be entitled to immediate release. e d