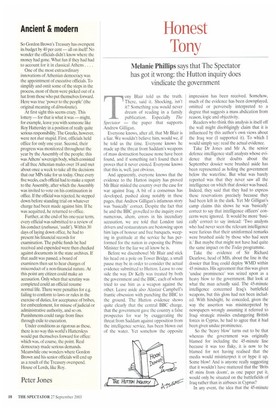 So Gordon Brown's Treasury has overspent its budget by 40 per cent — all on itself! No wonder the officials didn't know where the money had gone. What fun if they had had to account for it in classical Athens. . . .

One of the most extraordinary innovations of Athenian democracy was the appointment of executive officials. To simplify and omit some of the steps in the process, most of them were picked out of a hat from those who put themselves forward. Here was true 'power to the people' (the original meaning of demokratia).

At first sight this seems crazy. This lottery — for that is what it was — might, for example, leave you with someone like Roy Hattersley in a position of really quite serious responsibility. The Greeks, however, were not that stupid. First, officials held office for only one year. Second, their progress was monitored throughout the year by the Assembly of the people; this was Athens' sovereign body, which consisted of all free Athenian males over 18 and met about once a week to take all the decisions that our MPs take for us today. Once every five weeks, each official had to make a report to the Assembly, after which the Assembly was invited to vote on his continuation in office. If the official was rejected, he stepped down before standing trial on whatever charge had been made against him. If he was acquitted, he returned to office.

Further, at the end of his one-year term, every official was submitted to a review of his conduct (euthunai, 'audit'). Within 30 days of laying down office, he had to present his financial records for examination. The public funds he had received and expended were then checked against documents in the state archives. If that audit was passed, a board of examiners then sat to hear charges of misconduct of a non-financial nature. At this point any citizen could make an accusation. Only when that scrutiny was completed could an official resume normal life. There were penalties for e.g. failing to conform to laws or rules in the exercise of duties, for acceptance of bribes, for embezzlement, for misuse of judicial or administrative authority, and so on. Punishments could range from fines through exile to execution.

Under conditions as rigorous as these, there is no way this world's Hattersleys would put themselves forward for office: which was, of course, the point. Real democracy made serious demands. Meanwhile one wonders where Gordon Brown and his senior officials will end up as a result of the Treasury overspend. House of Lords, like Roy.