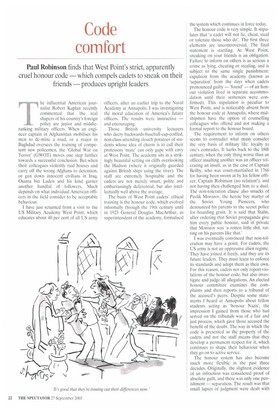 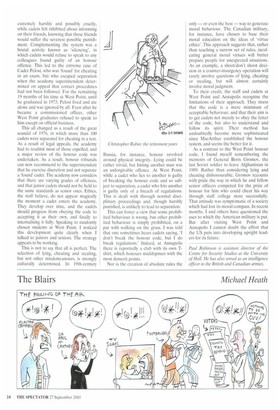 Paul Robinson finds that West Point's strict, apparently cruel honour code — which compels cadets to sneak on their friends — produces upright leaders The influential American journalist Robert Kaplan recently commented that the real shapers of his country's foreign policy are junior and middleranking military officers. When an engineer captain in Afghanistan mobilises his men to de-mine a road, or a major in Baghdad oversees the training of competent new policemen, the 'Global War on Terror' (GWOT) moves one step further towards a successful conclusion. But when their colleagues violently raid houses and carry off the wrong Afghans to detention, or gun down innocent civilians in Iraq, Osama bin Laden and his kind garner another handful of followers. Much depends on what individual American officers in the field consider to be acceptable behaviour.

I have just returned from a visit to the US Military Academy West Point, which educates about 40 per cent of all US army officers, after an earlier trip to the Naval Academy at Annapolis. I was investigating the moral education of America's future officers. The results were instructive — and encouraging.

Those British university lecturers who decry backwards-baseball-cap-coiffed, non-class-attending slouch potatoes of students whose idea of charm is to call their professors 'mate' can only gape with envy at West Point. The academy sits in a strikingly beautiful setting on cliffs overlooking the Hudson (where it originally guarded against British ships using the river). The staff are extremely hospitable and the cadets are not merely smart, polite and embarrassingly deferential, but also intellectually well above the average.

The basis of West Point cadets' ethical training is the honour code, which evolved informally through the 19th century until in 1923 General Douglas MacArthur, as superintendent of the academy, formalised the system which continues in force today.

The honour code is very simple. It stipulates that 'a cadet will not lie, cheat, steal or tolerate those who do'. The first three elements are uncontroversial. The final statement is startling. At West Point, sneaking on your friends is an obligation. Failure to inform on others is as serious a crime as lying, cheating or stealing, and is subject to the same single punishment: expulsion from the academy (known as 'separation' from the days when cadets pronounced guilty — 'found' — of an honour violation lived in separate accommodation until their sentences were confirmed). This stipulation is peculiar to West Point, and is noticeably absent from the honour code at Annapolis, where midshipmen have the option of counselling colleagues who offend and not making a formal report to the honour board.

The requirement to inform on others seems to contradict what many consider the very basis of military life: loyalty to one's comrades. It harks back to the 18th century, when the only thing worse than an officer insulting another was an officer tolerating an insult, as in the case of Captain Beilby, who was court-martialled in 1766 for having been sworn at by his fellow officer, Captain Robinson (no relation?), and not having then challenged him to a duel. The non-toleration clause also smacks of Paylik Morozov, the heroic boy martyr of the Soviet Young Pioneers, who denounced his parents to the secret police for hoarding grain. It is said that Stalin, after ordering that Soviet propaganda give him every public honour, said in private that Morozov was 'a rotten little shit, ratting on his parents like that.'

I was eventually convinced that non-toleration may have a point. For cadets, the US army is not an oppressive alien regime. They have joined it freely, and they are its future leaders. They must learn to enforce its standards and adopt them as their own. For this reason, cadets not only report violations of the honour code, but also investigate and judge all allegations. An elected honour committee examines the complaints and then reports to a tribunal of the accused's peers. Despite some statements I heard at Annapolis about fellow students acting as 'honour Nazis', the impression I gained from those who had served on the tribunals was of a fair and just process, which gave those accused the benefit of the doubt. The way in which the code is presented as the property of the cadets and not the staff means that they develop a permanent respect for it, which continues to shape their behaviour when they go on to active service.

The honour system has also become much more flexible in the past three decades. Originally, the slightest evidence of an infraction was considered proof of absolute guilt, and there was only one punishment — separation. The result was that small lapses of judgment were dealt with extremely harshly and possibly cruelly, while cadets felt inhibited about informing on their friends, knowing that these friends would suffer the severest possible punishment. Complementing the system was a brutal activity known as 'silencing', in which cadets would refuse to speak to any colleagues found guilty of an honour offence. This led to the extreme case of Cadet Pelosi, who was 'found' for cheating in an exam, but who escaped separation when the academy superintendent determined on appeal that correct procedures had not been followed. For the remaining 19 months of his time at West Point, until he graduated in 1973, Pelosi lived and ate alone and was ignored by all. Even after he became a commissioned officer, other West Point graduates refused to speak to him except on official business.

This all changed as a result of the great scandal of 1976, in which more than 100 cadets were separated for cheating in a test. As a result of legal appeals, the academy had to readmit most of those expelled, and a major review of the honour code was undertaken, As a result, honour tribunals can now recommend to the superintendent that he exercise discretion and not separate a 'found' cadet. The academy now considers that there are varying grades of offences, and that junior cadets should not be held to the same standards as senior ones. Ethics, the staff believe, do not appear magically the moment a cadet enters the academy. They develop over time, and the cadets should progress from obeying the code to accepting it as their own, and finally to internalising it fully. Speaking to randomly chosen students at West Point, I noticed this development quite clearly when I talked to juniors and seniors. The strategy appears to be working.

This is not to say that all is perfect. The selection of lying, cheating and stealing, but not other misdemeanours, is strongly culturally determined. In 19th-century Russia, for instance, honour revolved around physical integrity. Lying could be rather trivial, but hitting another man was an unforgivable offence. At West Point, while a cadet who lies to another is guilty of breaking the honour code and so subject to separation, a cadet who hits another is guilty only of a breach of regulations. This is dealt with through normal disciplinary proceedings and, though harshly punished, is unlikely to lead to separation.

This can foster a view that some prohibited behaviour is wrong, but other prohibited behaviour is simply prohibited, on a par with walking on the grass. I was told that one sometimes hears cadets saying, 'I don't break the honour code, but I do break regulations.' Indeed, at Annapolis there is reportedly a club with its own Tshirt, which honours midshipmen with the most demerit points.

Nor is the creation of absolute rules the only — or even the best — way to generate moral behaviour. The Canadian military, for instance, have chosen to base their moral education on the ideas of 'virtue ethics'. This approach suggests that, rather than teaching a narrow set of rules, inculcating general moral virtues will better prepare people for unexpected situations. As an example, a shoot/don't shoot decision in a counter-insurgency operation will rarely involve questions of lying, cheating or stealing, but will almost certainly involve moral judgment.

To their credit, the staff and cadets at West Point and Annapolis recognise the limitations of their approach. They stress that the code is a mere minimum of acceptable behaviour, and that their aim is to get cadets not merely to obey the letter of the code, but also to understand and follow its spirit. Their method has undoubtedly become more sophisticated since MacArthur established the honour system, and seems the better for it.

As a contrast to the West Point honour code, I found myself remembering the memoirs of General Boris Gromov, the last Soviet soldier to leave Afghanistan in 1989. Rather than considering lying and cheating dishonourable, Gromov recounts with pride the way in which he and fellow senior officers competed for the prize of honour for him who could cheat his way through staff college most successfully. That attitude was symptomatic of a society which had lost its moral compass. In recent months, I and others have questioned the uses to which the American military is put. But after visiting West Point and Annapolis I cannot doubt the effort that the US puts into developing upright leaders for its future.

Paul Robinson is assistant director of the Centre for Security Studies at the University of Hull. He has also served as an intelligence officer in the British and Canadian armies.