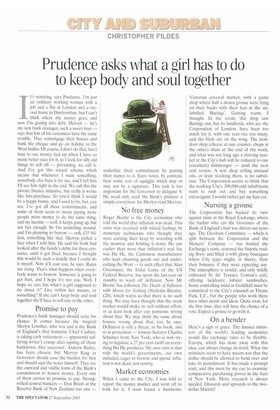 Page 32, 27 September 2003 — Prudence asks what a girl has to do to keep body and soul together
Close

1 t's worrying, says Prudence. I'm just an ordinary working woman with a job and a flat in London and a second home in Dunfermline, but I can't think where the money goes, and now I'm getting into debt. Mervyn — he's my new bank manager, such a sweet man — says that lots of his customers have the same trouble. They remortgage their houses and bank the cheque and go on holiday in the West Indies. Of course, I don't do that, but I hate to see money tied up when I have so many better uses for it, so I look for silly old things to sell off — privatising, we call it. And I've got this wizard scheme which means that whenever I want something, somebody else buys it for me, and I tell him I'll see him right in the end. We call this the private finance initiative, but really it works like hire-purchase. So you'd think I would be a happy bunny, and I used to be, but, you see. I've got all these commitments, and some of them seem to mean paying more people more money to do the same thing, and my income — well, it keeps going up. but not fast enough. So I'm scratching around. and I'm planning to borrow — ooh, £35 billion, something like that. Mervyn pulled a face when I told him. He said his bank had looked after the family's debts for three centuries, until it got fired, because I thought this would be such a doddle that I could do it myself. Now it'll cost you, he says. Rates are rising. That's what happens when everybody wants to borrow. Someone is going to get hurt, and I hope it's not you. Well, I hope so, too, but what's a girl supposed to do about it? Live within her means, or something? If she can't keep body and soul together she'll have to sell one or the other.

Prudence's bank manager should seize his chance. It comes because the magical Merlyn Lowther, who was and is the Bank of England's first feminine Chief Cashier, is taking early retirement — apparently suffering writer's cramp after signing all those banknotes. Her successor. Andrew Bailey, has been chosen, but Mervyn King as Governor should ease the burden for him and should sign the notes himself. They are the outward and visible form of the Bank's commitment to honest money. Every one of them carries its promise to pay. Strongwilled central bankers — Don Brash at the Reserve Bank of New Zealand was one — underline their commitment by putting their names to it. Euro notes, by contrast, bear some sort of squiggle which may or may not be a signature. This task is too important for the Governor to delegate it. He need only send the Bank's printers a simple correction: for Merlyn read Mervyn.

Roger Bootle is the City economist who told the world that inflation was dead. This news was received with mixed feelings by monetary technicians who thought they were earning their keep by wrestling with the monster and holding it down. He saw earlier than most that inflation's real foe was Hu He, the Cantonese manufacturer who kept churning goods out and undercutting the West — to such effect that Alan Greenspan, the Dalai Lama of the US Federal Reserve, has spent the last year on standby to ward off deflation. Now Mr Bootle has followed The Death of Inflation with Money for Nothing (Nicholas Brealey. £20), which warns us that there is no such thing. We may have thought that the stock market would make us rich without effort, or at least look after our pensions: wrong about that. We may think the same about houses: wrong about that, too, he says. Deflation is still a threat, in his book, and so is protection — witness Senator Charles Schumer from New York, who is now trying to legislate a 27 per cent tariff on everything Hu He produces. My own view is that with the world's governments, our own included, eager to borrow and spend, inflation is not dead, just resting.

When I came to the City. I was told to report the money market and went off to look for it. I soon found a handsome

Victorian covered market, with a game shop where half a dozen grouse were lying on their backs with their feet in the air, labelled `Barings'. Getting warm, I thought. In the event, this shop saw Barings out, but its landlords, who are the Corporation of London, have been too much for it, with one rent rise too many, and the birds are on the wing. The nextdoor shop (cheese at one counter, chops at the other) shuts at the end of the week, and what was not long ago a thriving market at the City's hub will be reduced to one (excellent) fishmonger — until the next rent review. A new shop selling unusual oils, or least stocking them, is no substitute. The Corporation seems to think that the working City's 300,000-odd inhabitants want to rush out and buy something extravagant. I would rather get my hair cut.

The Corporation has backed its view against mine at the Royal Exchange, where the barber who cut the Governor of the Bank of England's hair was driven out years ago. The Gresham Committee — which is split between the Corporation and the Mercers' Company — has hoisted the Exchange's rents, restored the historic trading floor, and filled it with glossy boutiques where City types might, in theory, blow their bonuses, if they were expecting any. The atmosphere is restful, and only mildly enlivened by Sir Terence Conran's café, offering lacklustre lobster sandwiches. Some controlling mind in Guildhall must be committed to the City's relaunch as Theme Park, E.C., but the people who work there have other needs and ideas. Quite soon, for the first time, they will have the chance of a vote. Expect a grouse to go with it.

Here's a sign of grace. The finance ministers of the world's leading economies would like exchange rates to be flexible. Europe, which has done away with this idea, can always change its mind. What the ministers seem to have meant was that the dollar should be allowed to bend over and take its punishment. It has made a prompt start, and this must be my cue to examine comparative purchasing power in the bars of New York. More research is always needed. Onwards and upwards to the twodollar Martini!