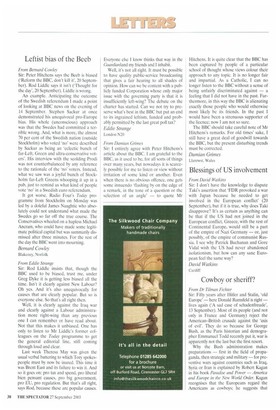 Leftist bias of the Beeb

An example. Anticipating the outcome of the Swedish referendum I made a point of looking at BBC news on the evening of 14 September. Stephen Sackur at once demonstrated his unequivocal pro-Europe bias. His whole (unconscious) approach was that the Swedes had committed a terrible wrong. And, what is more, the almost 70 per cent of the Swedish nation (outside Stockholm) who voted 'no' were described by Sackur as being an 'eclectic bunch of far-Left, Green and ultra-conservative voters'. His interview with the scolding Prodi was not counterbalanced by any reference to the rationale of the 'no' voters. Instead, what we saw was a joyful bunch of Stockholm far-Left Greens whooping it up in a pub, just to remind us what kind of people vote 'no' in a Swedish euro referendum.

It got worse. Radio Four's Today programme from Stockholm on Monday was led by a doleful James Naughtie who absolutely could not understand what made the Swedes go so far off the true course. The Conservatives wheeled on a hapless Michael Ancram, who could have made some legitimate political capital but was summarily dismissed after three minutes. For the rest of the day the BBC went into mourning.

Sir: Rod Liddle insists that, though the BBC used to be biased, trust me, under Greg Dyke it is getting less biased all the time. Isn't it clearly against New Labour? Oh yes. And it's also unequivocally for causes that are clearly popular. But so is everyone else. So that's all right then.

Well, it is clearly against the Iraq war and clearly against a Labour administration more right-wing than any previous one I can remember or have read about. Not that this makes it unbiased. One has only to listen to Mr Liddle's former colleagues on the Today programme to get the general editorial line, still coming through loud and clear.

Last week Theresa May was given the usual verbal battering to which Tory spokespeople must by now be inured. This time it was Brent East and its failure to win it. And so it goes on: pro tax and spend, pro liberal bien pensant causes, pro big government, pro EU, pro regulation. But that's all right, says Rod, because these are popular causes. Everyone else I know thinks that way in the Guardiardand my friends and I inhabit.

Well, it's not all right. It must be possible to have quality public-service broadcasting that gives a fair hearing to all shades of opinion. How can we be content with a publicly funded Corporation whose only major issue with the governing party is that it is insufficiently left-wing? The debate on the charter has started. Can we not try to preserve what's best in the BBC but put an end to its ingrained leftism, funded and probably permitted by the last great poll tax? Eddie Strange London N20 From Damian Grimes Sir: I entirely agree with Peter Hitchens's article about the BBC. I am grateful to the BBC, as it used to be, for all sorts of things over many years, but nowadays it is scarcely possible for me to listen or view without irritation of some kind or another. Even when there is no obvious offence, one gets some innuendo 'flashing by on the edge of a remark, in the tone of a question or the selection of an angle' — to quote Mr Hitchens. It is quite clear that the BBC has been captured by people of a particular school of thought whose views colour their approach to any topic. It is no longer fair and impartial. As a Catholic, I can no longer listen to the BBC without a sense of being unfairly discriminated against — a feeling that I did not have in the past. Furthermore, in this way the BBC is alienating exactly those people who would otherwise most likely be its friends. In the past I would have been a strenuous supporter of the licence; now I am not so sure.

The BBC should take careful note of Mr Hitchens's remarks. For old times' sake, I still have a great deal of goodwill towards the BBC, but the present disturbing trends must be corrected.