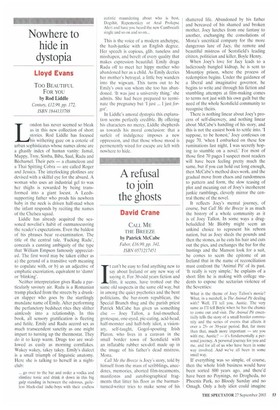 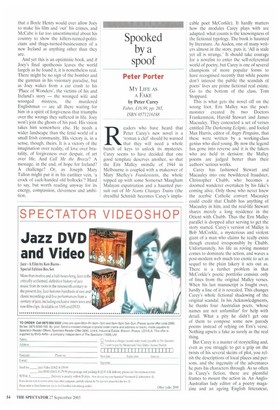 A refusal to join the ghosts

1 t can't be easy to find anything new to say about Ireland or any new way of saying it. For 30-odd years fiction and film, it seems, have trotted out the same old suspects in the same old way, but in among the quiet psychotics and the bent politicians, the bar-room republican, the Special Branch thug and the parish priest Patrick McCabe has given us something else — Joey Talion, a foul-mouthed, grotesque, one-eyed, pie-eating, acid-head, half-monster and half-holy idiot, a visionary, self-taught, Gogol-spouting Irish Platon. who lives in a caravan in the small border town of Scotsfield with an inflatable rubber sex-doll made up in the image of his father's dead mistress, Mona.

Call Me the Breeze is Joey's story, told by himself from the mass of scribblings, anecdotes, memories, aborted film-treatments, manifestos and autobiographical fragments that litter his floor as the barmanturned-writer tries to make sense of his shattered life. Abandoned by his father and bereaved of his shamed and broken mother, Joey lurches from one fantasy to another, exchanging the consolations of Mona's uncritical company for the more dangerous lure of Jacy, the remote and beautiful mistress of Scotsfield's leading citizen, politician and killer, Boyle Henry.

When Joey's love for Jacy leads to a ludicrously bungled kidnap, he is sent to Mountjoy prison, where the process of redemption begins. Under the guidance of a liberal and imaginative governor, he begins to write and through his fiction and stumbling attempts at film-making comes to terms not just with his own guilt but the need of the whole Scotsfield community to recognise theirs.

There is nothing linear about Joey's process of self-discovery, and nothing linear about McCabe's handling of his story, and this is not the easiest book to settle into. 'I suppose, to be honest,' Joey confesses on page 70, 'when I embarked on these few ruminations last night, I was secretly hoping to stumble on a novel.' For most of those first 70 pages I suspect most readers will have been feeling pretty much the same, but if you can hold out long enough, then McCabe's method does work, and the gradual move from chaos and randomness to pattern and form, the slow teasing of plot and meaning out of Joey's incoherent junkie ramblings, cleverly mirror the central theme of the novel.

It reflects Joey's mental journey, of course, but Call Me the Breeze is as much the history of a whole community as it is of Joey TalIon. In some ways a drugbefuddled Mr Blobby might seem an unkind choice to represent his reborn nation, but as Joey sheds the pounds and then the stones, as he cuts his hair and cuts out the pies, and exchanges the bar for the hustings and the Manson look for a suit, he comes to seem the epitome of an Ireland that in the name of reconciliation must confront the 'Animal Pit' of its past. 'It really is very simple,' he explains of a short film he is making with college students to expose the sectarian violence of the Seventies:

What is the theme of Joey Tailon's movie? What, in a nutshell, is The Animal Pit dealing with? Well, I'll tell you, Austie. The very same as I'll tell Boyle when he has the chance to Come out and visit. The Animal Pit essentially tells the story of a small border community and the series of events that affects it over a 25or 30-year period. But, far more than that, much more important — are you with me, Austie? — it's fundamentally a personal journey. A personal journey for you and me, and for all of us who have been in some way involved. And we've all been in some small way.

If everything was so simple, of course, then the whole Irish business would have been sorted 800 years ago, and there'd have been no Poynings, no Drogheda, no Phoenix Park, no Bloody Sunday and no Omagh. Only a holy idiot could imagine that a Boyle Henry would ever allow Joey to make his film and 'out' his crimes, and McCabe is far too unsentimental about his country to show the killers-turned-politicians and thugs-turned-businessmen of a new Ireland as anything other than they are.

And yet this is an optimistic book, and if Joey's final apotheosis leaves the world largely as he found it, it is nonetheless real. There might be no sign of the bomber and the gunman in his visionary paradise, but as Joey wakes from a car crash to his 'Place of Wonders', the victims of his and Ireland's story — the wronged wife and wronged mistress, the murdered Englishman — are all there waiting for him in a spirit of forgiveness that triumphs over the wrongs they suffered in life. Joey won't join the ghosts of his past. His vision takes him somewhere else. He needs a wider landscape than the fetid world of a small Irish community. His victory is, in a sense, though, theirs. It is a victory of the imagination over reality, of love over brutality, of forgiveness over despair, of art over life. And Call Me the Breeze? A message, in the end, of hope for Ireland? A challenge? Or, as Joseph Mary Tallon might put it in his earthier vein, 'a crock of cack-handed old bollocks'? Hard to say, but worth reading anyway for its energy, compassion, cleverness and ambition.