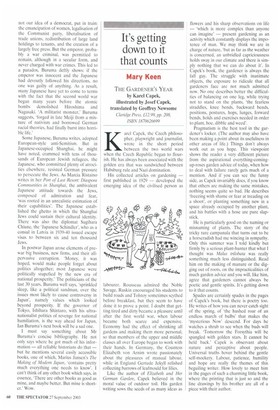 It's getting down to it that counts

THE GARDENER'S YEAR by Karel Capek, illustrated by Josef Capek, translated by Geoffrey Newsome Claridge Press, £12.99, pp. 208, ISBN 1870626699 Karel Capek. the Czech philosopher, playwright and journalist, wrote in the short period between the two world wars when the Czech Republic began to flourish. He has always been associated with the golden era that was sandwiched between Habsburg rule and Nazi domination,

His collected articles on gardening — first published in 1929 — developed the emerging idea of the civilised person as labourer. Rousseau admired the Noble Savage, Ruskin encouraged his students to build roads and Tolstoy sometimes scythed before breakfast, but they seem to have done it to prove a point. I doubt that getting tired and dirty became a pleasure until after the first world war, when labour became both scarce and expensive. Economy had the effect of shrinking all gardens and making them more personal, so that members of the upper and middle classes all over Europe began to work with their hands. In Germany, the Countess Elizabeth von Arnim wrote passionately about the pleasures of manual labour, while in England Gertude Jekyll relished collecting barrows of leafmould for lilies.

Like the author of Elizabeth and Her German Garden, Capek believed in the moral value of outdoor toil. His garden writing sows the seeds of as many ideas as flowers and his sharp observations on life — 'which is more complex than anyone can imagine' — present gardening as an activity which constantly displays the impotence of man. We may think we are in charge of nature, 'but as far as the weather is concerned, an unbridled capriciousness holds sway in our climate and there is simply nothing that we can do about it'. In Capek's book, the gardener is always the fall guy. The struggle with inanimate objects, the exposure to ridicule that all gardeners face are not much admitted now. No one describes better the difficulties of balancing on one leg, while trying not to stand on the plants, 'the fearless straddles, knee bends, backward bends, positions, postures, hops, lunges, forward bends, holds and exercises needed in order to plant, hoe, dibble and weed'.

Pragmatism is the best tool in the gardener's locker. (The author may also have been making a point about its usefulness in other areas of life.) Things don't always work out as you hope. This viewpoint shows the reader a very different picture from the aspirational everything-comingup-roses garden advice of today, when how to deal with failure rarely gets much of a mention. And if you can see the funny side, as Capek invariably does, if you know that others are making the same mistakes, nothing seems quite so bad. He describes 'freezing with shame or fear at treading on a shoot', or planting something new in a space already occupied by another plant, and his battles with a hose are pure slapstick.

He is particularly good on the naming or misnaming of plants. The story of the tricky rare campanula that turns out to be a horseradish had me wincing in sympathy. Only this summer was I told kindly but firmly by a serious plant-hunter that what I thought was Ma/us trilobata was really something much less distinguished. Read him on the making of manure or the digging out of roots, on the impracticalities of much garden advice and you will, like him, agree that gardeners cannot always be poetic and gentle spirits. It's getting down to it that counts.

Spades are certainly spades in the pages of Capek's book, but there is poetry too. He writes of how you can never catch sight of the spring, of 'the hushed roar of an endless march of bulbs' that makes the 'mysterious Now' descend. For days he watches a shrub to see when the buds will break. 'Tomorrow the Forsythia will be spangled with golden stars. It cannot be held back.' Capek is observant about nature and perceptive about people. Universal truths hover behind the gentle self-mockery. Labour, patience, humility and hope are really the themes of this beguiling writer. How lovely to meet him in the pages of such a charming little book, where the printing that is just so and the line drawings by his brother are all of a piece with their author.