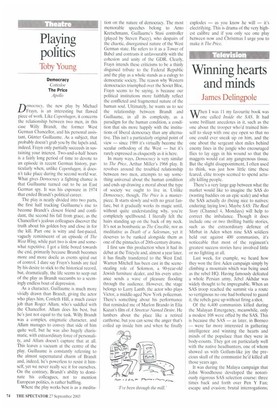 Democracy. the new play by Michael Frayn, is an interesting but flawed piece of work. Like Copenhagen, it concerns the relationship between two men, in this case Willy Brandt, the former West German Chancellor, and his personal assistant, Gunter Guillaume. As a subject, that probably doesn't grab you by the lapels and, indeed, Frayn only partially succeeds in sustaining your interest. Two-and-a-half hours is a fairly long period of time to devote to an episode in recent German history, particularly when, unlike Copenhagen, it doesn't take place during the second world war. What gives Democracy a fighting chance is that Guillaume turned out to be an East German spy. It was his exposure in 1974 that ended Brandt's political career.

The play is neatly divided into two parts, the first half tracking Guillaume's rise to become Brandt's closest friend and confidant, the second his fall from grace, as the Chancellor's jealous colleagues discover the truth about his golden boy and close in for the kill. Part one is witty and fast-paced, vaguely reminiscent of an episode of The West Wing, while part two is slow and somewhat repetitive. I got a little bored towards the end, primarily because Brandt becomes more and more docile as events spiral out of control. I dare say Frayn's hands are tied by his desire to stick to the historical record, but, dramatically, the life seems to seep out of the play as Brandt succumbs to a seemingly endless bout of depression.

As a character, Guillaume is much more vividly drawn than Brandt, giving the actor who plays him, Conleth Hill, a much easier job than Roger Allam, who's saddled with the Chancellor. Allam does his best, but he's just not equal to the task. Willy Brandt was a complex, enigmatic character, and Allam manages to convey that side of him quite well, but he was also hugely charismatic, with extraordinary force of personality, and Allam doesn't capture that at all. This leaves a vacuum at the centre of the play. Guillaume is constantly referring to the almost supernatural charm of Brandt and, indeed, he's powerless to resist it himself, yet we never really see it for ourselves. On the contrary, Brandt's ability to dominate his colleagues, not to mention European politics, is rather baffling.

Where the play works best is as a medita

tion on the nature of democracy. The most memorable speeches belong to Arno Kretschmann, Guillaume's Stasi controller (played by Steven Pacey), who despairs of the chaotic, disorganised nature of the West German state. He refers to it as a Tower of Babel and contrasts it unfavourably with the cohesion and unity of the GDR. Clearly, Frayn intends these criticisms to be a thinly disguised tribute to the Federal Republic and the play as a whole stands as a eulogy to democratic society. The reason why Western democracies triumphed over the Soviet Bloc, Frayn seems to be saying, is because our political institutions more faithfully reflect the conflicted and fragmented nature of the human soul. Ultimately, he wants us to see the relationship between Brandt and Guillaume, in all its complexity, as a paradigm for the human condition, a condition that sits more happily with the institutions of liberal democracy than any alternative. This isn't a particularly original point of view — since 1989 it's virtually become the secular orthodoxy of the West — but it's rarely expressed as eloquently as it is here.

In many ways, Democracy is very similar to The Price, Arthur Miller's 1968 play. It revolves around the troubled relationship between two men, attempts to say something universal about the human condition and ends up drawing a moral about the type of society we ought to live in. Unlike Democracy, though, The Price is a masterpiece. It starts slowly and with no great fanfare, but it gradually works its magic until, without quite understanding why, you're completely spellbound. I literally felt the hairs standing up on the back of my neck. It's not as bombastic as The Crucible, nor as meditative as Death of a Salesman, yet it deserves to be ranked alongside them as one of the pinnacles of 20th-century drama.

I first saw this production when it had its debut at the Tricycle and, almost a year later, it has finally transferred to the West End. Warren Mitchell has been cast in the scenestealing role of Solomon, a 90-year-old Jewish furniture dealer, and his every utterance sends a wave of pleasure flooding through the audience. However, the stage belongs to Larry Lamb, the actor who plays Victor, a middle-aged New York policeman. There's something about his performance that reminded me of Marlon Brand° in Elia Kazan's film of A Streetcar Named Desire. He lumbers about the place like a retired carthorse, but you can sense the anger that's coiled up inside him and when he finally explodes — as you know he will — it's electrifying. This is drama of the very highest calibre and if you only see one play between now and Christmas I urge you to make it The Price.