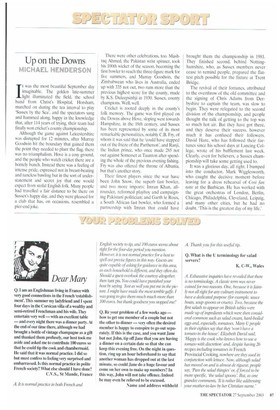 Q. I am an Englishman living in France with very good connections in the French 'establishment'. This summer my ladyfriend and I spent four days in the Corsican villa of a wealthy and semi-retired Frenchman and his wife. They entertain very well — with an excellent table — and every night there was a dinner party. At the end of our time there, although we had brought a bottle of vintage champagne as a gift and thanked them profusely, our host took me aside and asked me to contribute 100 euros so that he could tip the cook and chambermaid. He said that it was normal practice. I did so but must confess to feeling very surprised and embarrassed. Is this normal practice in polite French society? What else should! have done?

English society to rip and 100 euros seems about right for the four-day period you mention. However, it is not normal practice for a host to spell out precise figures in this way Guests are quite capable of asking for guidance in this area, as each household is different, and they often do. Should a guest overlook the courtesy altogether, then tant pis. You could have punished your host by saying 'Just as well you put me in the picture. 1 might have made the most terrible gaffe. I was going to give them much much more than 100 euros, but thank goodness you stopped me!'

Q. Re your problem of a few weeks ago — how to get one member of a couple but not the other to dinner — very often the desired member is happy to conspire to go out separately. If this is the case, and you want Jane but not John, tip off Jane that you are having a dinner on a certain date so that she can keep this evening free. On the night in question, ring up an hour beforehand to say that another woman has dropped out at the last minute, so could Jane do a huge favour and come on her own to make up numbers? In this way, John will not take offence. Indeed he may even be relieved to be excused.

Name and address withheld A. Thank you for this useful tip.

Q. What is the U terminology for salad servers?

A. Exhaustive inquiries have revealed that there is no terminology. A classic term was never coined for two reasons. One, because it is faintly not all right for any culinary instrument to have a dedicated purpose (for example, sauce boats; soup spoons or cruets). Two, because the first salads to appear on British tables were made up of ingredients which were then considered common such as salad cream, hard-boiled eggs and, especially tomatoes. Many LI people in their eighties say that they 'won't have a tomato in the house: Elizabeth David said, 'Happy is the cook who knows how to use a tomato with discretion' and, despite having 26 recipes including tomatoes in French Provincial Cooking nowhere are they used in conjunction with lettuce. Now; although salad has moved on and is almost de rigueur, people say 'Pass the salad thingies' or, if forced to be more specific, 'the salad spoons'. But, as one grandee comments, 'It is rather like addressing your mother-in-law by her Christian name.'