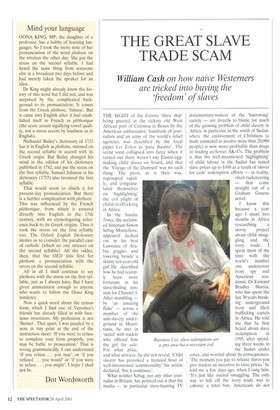 OONA KING, MP, the daughter of a professor, has a hobby of learning languages. So I took the more note of her pronunciation of the word plethora on the wireless the other day. She put the stress on the second syllable. I had heard the same thing from someone else in a broadcast two days before and had merely taken the speaker for an idiot.

Dr King might already know the history of this word but I did not, and was surprised by the complicated background to its pronunciation. It comes from the Greek plethora, 'fulness'. But it came into English after it had established itself in French as plethorique (the acute accent signifying vowel quality, not a stress accent by loudness as in English).

That would seem to clinch it for present-day pronunciation. But there is a further complication with plethoric. This was influenced by the French plethorique, from which it entered directly into English in the 17th century, with no etymologising reference back to its Greek origins. Thus it took the stress on the first syllable too. The Oxford English Dictionary invites us to consider the parallel case of catholic (which no one stresses on the second syllable). All the odder, then, that the OED lists first for plethoric a pronunciation with the stress on the second syllable.

All in all I shall continue to say plethora with the stress on the first syllable, just as I always have. But I have given ammunition enough to anyone who wants to follow the Ooria King tendency.

Now a quick word about the census form, which I find one of Veronica's friends has already filled in with facetious inventions. My profession is not Tenser'. That apart, I was puzzled by a note in tiny print at the end of the instruction sheet: 'If you were to refuse to complete your form properly, you may be liable to prosecution.' That is wrong grammatically. I can understand 'if you refuse ... you may', or 'if you refused ... you would' or 'if you were to refuse . . . you might'. I hope I shall not be.