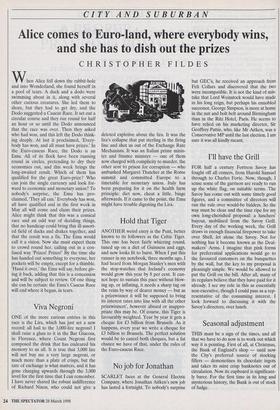 ANOTHER weird entry is the Punt, better known to its followers as the Celtic Tiger. This one has been fairly whizzing round, tuned up on a diet of Guinness and eggs, and now looks fit to burst. When I put this runner in my notebook, three months ago, I had heard from Morgan Stanley's men with the stop-watches that Ireland's economy would grow this year by 8 per cent. It can- not hope to sustain this pace without blow- ing up, or inflating, it needs a sharp tug on the reins by way of dearer money — but as a prizewinner it will be supposed to bring its interest rates into line with all the other prizewinners', however absurd or inappro- priate this may be. Of course, this Tiger is favourably weighted. Year by year it gets a cheque for £3 billion from Brussels. As it happens, every year we write a cheque for £3 billion to Brussels. The perfect solution would be to cancel both cheques, but a fat chance we have of that, under the rules of the Euro-caucus Race.