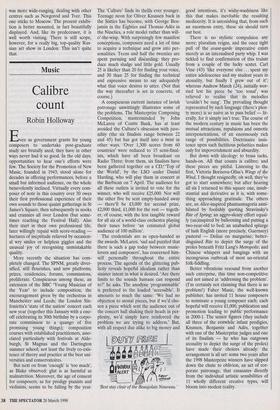 Even as government grants for young composers to undertake post-graduate study are brutally axed, they have in other ways never had it so good. In the old days, opportunities to hear one's efforts were few. The Society for the Promotion of New Music, founded in 1943, stood alone for decades in offering performances, before a small but informed audience, on the whole benevolently inclined. Virtually every com- poser of note in this country over 30 owes their first professional experience of their own sounds to those quaint gatherings in St James's Square, then subsequently in nooks and crannies all over London (but some- times reaching the Festival Hall). Also their start in their own professional life, later willingly repaid with score-reading hectares of ineptitude relieved by occasion- al wry smiles or helpless giggles and the unusual joy of recognising unmistakable quality.

More recently the situation has com- pletely changed. The SPNM, greatly diver- sified, still flourishes, and new platforms, prizes, residencies, forums, commissions, proliferate. Conspicuous among these, an extension of the BBC 'Young Musician of the Year' to include composition; the encouragement given by the orchestras in MancheSter and Leeds; the London Sin- fonietta's 'state of the nation' concert each new year (together this January with a one- off celebrating its 30th birthday by a corpo- rate commission to a quango of five promising young things); composition courses with established practitioners, asso- ciated particularly with festivals at Alde- burgh, St Magnus and the Dartington summer school; not least the lively co-exis- tence of theory and practice at the best uni- versities and conservatoires.

But next on from 'enough' is 'too much', as Blake observed: glut is as harmful as malnutrition. Moreover, the age of consent for composers, as for prodigy pianists and violinists, seems to be falling by the year. The 'Culture' finds its thrills ever younger. Teenage neon for Oliver Knussen back in the Sixties has become, with George Ben- jamin in the Eighties and Thomas Ades in the Nineties, a role model rather than will- o'-the-wisp. With surprisingly few manifest conceptions, composers need a lot of time to acquire a technique and grow into per- sonalities. Teens and half the twenties are spent pursuing and disoarding: they pro- duce much sludge and little gold. Usually 25 is likelier than 20 for finding your voice, and 30 than 25 for finding the technical and expressive means to say adequately what that voice desires to utter. (Not that the way thereafter is set in concrete, of course.) A conspicuous current instance of lavish patronage unwittingly illustrates some of the problems. The Masterprize Composing Competition, masterminded by John McLaren of Courts Bank, has at least avoided the Culture's obsession with juve- nility (the six finalists range between 22 and 45) but has got itself into a twist in other ways. 'Over 1,300 scores from 60 countries' were reduced to 15 semi-final- ists, which have all been broadcast on Radio Three; from them, six finalists have been gathered together on a CD; `Top of the World', by the ISO under Daniel Harding, who will play them in concert at the Barbican on 7 April. The audience for all these outlets is invited to vote for the winner, who will receive £25,000. Nor will the other five be sent empty-handed away — there'll be £3,000 for second prize, £2,000 third, £1,000 for the rest — togeth- er, of course, with the less tangible reward for all six of a world-class orchestra playing their tunes before 'an estimated global audience of 100 million'.

The credentials are as open-handed as the awards. McLaren, 'sad and puzzled that there is such a gap today between music- lovers and composers', has concerned him- self personally throughout the entire process. The agenda of the glittering pub- licity reveals hopeful idealism rather than sinister intent in what is desired. 'Are there limits to the sounds humans can respond to?' he asks. The anodyne 'programmable' is preferred to the loaded 'accessible'. It amounts to much the same: 'We had no objection to atonal pieces, but if we'd cho- sen a piece which sent the audience out of the concert hall shaking their heads in per- plexity, we'd simply have reinforced the problem we are trying to address.' But, with all respect due alike to big money and Best stay clear of the Beaujolais Nouveau.' good intentions, it's wishy-washiness like this that makes inevitable the resulting mediocrity. It is astonishing that, from such an enormous entry, these six should turn out best.

There is no stylistic compulsion any more; pluralism reigns, and the once tight pull of the avant-garde imperative exists merely as an internalised party whip. I was tickled to find confirmation of this truism from a couple of the lucky sextet. Carl Vine (43) 'like everyone else .. . spent my entire adolescence and my student years in atonality, but finally I grew out of it'; whereas Andrew March (24), initially wor- ried lest his piece be 'too tonal', was relieved to realise that its melodies `couldn't be sung'. The prevailing thought represented by such language (there's plen- ty more) is so naive as to pass belief — lit- erally, for it simply isn't true. The course of the modern century in music has been the mutual attractions, repulsions and osmotic interpenetrations, of an enormously rich range of possibilities. Doctrinaire insis- tence upon such factitious polarities makes only for impoverishment and absurdity.

But down with ideology: to brass tacks, hands-on. All that counts is calibre; and these pieces are pitiful. Listening to the first, Victoria Borisova-011as's Wings of the Wind, I thought resignedly, oh well, they've got to start somewhere; but after hearing all six I returned to this square one, insub- stantial and derivative as it is, with some- thing approaching gratitude. The others are, an Alice-inspired phantasmagoria anni- hilated by foolishly quoting Stravinsky's Rite of Spring; an aggro-sleazy effort equal- ly (un)inspired by ballooning and putting a two-year-old to bed; an unabashed splurge of lush English (more precisely, Guernsey) pastoral — Delius on margarine; better- disguised Rite to depict the surge of the proles beneath Fritz Lang's Metropolis; and Chinese whispers and bangings with an incongruous outbreak of most un-oriental folk-fiddling.

Better vibrations resound from another such enterprise, this time non-competitive and not aimed at 'addressing the problem'. (I'm certainly not claiming that there is no problem!) Faber Music, the well-known publisher, has invited 11 house composers to nominate a young composer each; each hopeful will receive £1,000, publication and promotion leading to public performance in 2000-1. The senior figures (they include all three of the erstwhile infant prodigies, Knussen, Benjamin and Ades, together with one of the Masterprize judges and one of its finalists — he who has outgrown atonality to depict the surge of the proles) have made their choices already: the arrangement is all set: some two years after the 1998 Masterprize winners have slipped down the chute to oblivion, an act of cor- porate patronage, that emanates directly from the individual artistic sensibilities of 11 wholly different creative types, will bloom into modest reality.