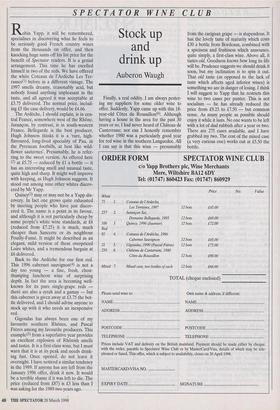 Stock up and drink up

The Ardeche, I should explain, is in cen- tral France, somewhere west of the Rhone. Jurancon, by contrast, is in south-western France. Bellegarde is the best producer. Hugh Johnson thinks it is a 'rare, high- flavoured, long-lived speciality of Pau, in the Pyrenean foothills, at best like wild- flower sauternes'. Presumably, he is refer- ring to the sweet version. As offered here (2) at £5.75 — reduced by £1 a bottle — it has an interesting smell and unusual taste, quite high and sharp. It might well improve with keeping, as Hugh Johnson suggests. It stood out among nine other whites discov- ered by Mr Yapp.

Quincy(3) may or may not be a Yapp dis- covery. In fact one grows quite exhausted by meeting people who have just discov- ered it. The name is a point in its favour, and although it is not particularly cheap by some people's white wine standards, at £6 (reduced from £7.25) it is much, much cheaper than Sancerre or its neighbour Pouilly-Fumé. It might be described as an elegant, mild version of these overpriced Loire whites, and a tremendous bargain at £6 delivered.

Back to the Ardeche for our first red. This 1996 cabernet sauvignon(4) is not a day too young. — a fine, fresh, chest- thumping luncheon wine of surprising depth. In fact the area is becoming well- known for its pure single-grape reds there are also a syrah and a gamay — but this cabernet is given away at £3.75 the bot- tle delivered, and I should advise anyone to stock up with it who needs an inexpensive red.

Gigondas has always been one of my favourite southern Rhones, and Pascal Freres among my favourite producers. This example(5) from a superlative year provides an excellent explosion of Rhonish smells and tastes. It is a first-class wine, but I must warn that it is at its peak and needs drink- ing fast. Once opened, do not leave it overnight. I have noticed a similar tendency in the 1989. If anyone has any left from the January 1996 offer, drink it now. It would be a terrible shame if it was left to die. The price (reduced from £87) is £3 less than I was asking for the 1989 two years ago. Finally, a real oddity. I am always pester- ing my suppliers for some older wine to offer. Suddenly, Yapp came up with this 18- year-old Cotes du Roussillon(6). Although having a house in the area for the past 30 years or so, I had never heard of Château de Cantevrane; nor can I honestly remember whether 1980 was a particularly good year for red wine in the southern Languedoc. All I can say is that this wine presumably from the carignan grape — is stupendous. It has the lovely taste of maturity which costs £30 a bottle from Bordeaux, combined with a spiciness and fruitiness which announce, quite simply, a first-class wine. Above all, it tastes old. Goodness knows how long its life will be. Prudence suggests we should drink it soon, but my inclination is to spin it out. That old taste (as opposed to the lack of taste which affects aged inferior wines) is something we are in danger of losing. I think I will suggest to Yapp that he restricts this wine to two cases per punter. This is not socialism — he has already reduced the price from £9.25 to £7.50 — but common sense. As many people as possible should enjoy it while it lasts. No one wants to be left with a lot of dud rubbish after a year or two. There are 275 cases available, and I have grabbed my two. The cost of the mixed case (a very curious one) works out at £5.50 the bottle.