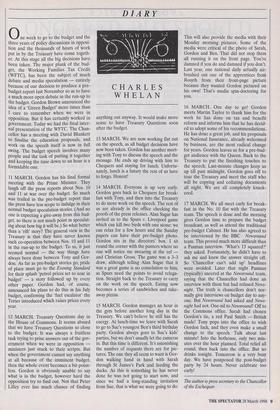 CHARLES WHELAN 0 ne week to go to the budget and the three years of policy discussions in opposi- tion and the thousands of hours of work put in by the Treasury have come togeth- er. At this stage all the big decisions have been taken. The major plank of the bud- get, the Working Families Tax Credit (WFTC), has been the subject of much debate and media speculation — entirely because of our decision to produce a pre- budget report last November so as to have a much more open debate in the run-up to the budget. Gordon Brown announced the idea of a 'Green Budget' more times than I care to remember when we were in Opposition. But it has certainly worked in government. Today we had the final inter- nal presentation of the WFTC. The Chan- cellor has a meeting with David Blunkett to finalise the education proposals, and work on the speech itself is now in full swing. The budget speech involves many people and the task of putting it together and keeping the time down to an hour is a formidable one.

11 MARCH. Gordon has his final formal meeting with the Prime Minister. They laugh off the press reports about Nos. 10 and 11 at war over the budget. So much was trailed in the pre-budget report that the press have less scope to indulge in their normal budget speculation stories. (And no one is expecting a give-away from this bud- get, so there is not much point in speculat- ing about how big it will be.) So what better than a 'rift' story? The general view in the Treasury is that they have never known such co-operation between Nos. 10 and 11 in the run-up to the budget. To us, it just seemed normal — the way things have always been done between Tony and Gor- don. As far as pre-budget stories go, pride of place must go to the Evening Standard for their splash 'petrol prices set to soar in budget' — a story followed up by every other paper. Gordon had, of course, announced his plans to do this in his July budget, confirming the 'fuel escalator' the Tories introduced which raises prices every year.

12 MARCH. Treasury Questions day in the House of Commons. It seems absurd that we have Treasury Questions so close to the budget. It was always a fruitless task trying to prise answers out of the gov- ernment when we were in opposition ministers just stuck to their scripts. But when the government cannot say anything at all because of the imminent budget, then the whole event becomes a bit point- less. Gordon is obviously unable to say what. is in the budget, however hard the opposition try to find out. Not that Peter Lilley ever has much chance of finding anything out anyway. It would make more sense to have Treasury Questions soon after the budget.

13 MARCH. We are now working flat out on the speech, as all budget decisions have now been taken. Gordon has another meet- ing with Tony to discuss the speech and the message. He ends up driving with him to Chequers and staying for lunch. Unfortu- nately, lunch is a luxury the rest of us have to forgo. Honest!

14 MARCH. Everyone is up very early. Gordon goes back to Chequers for break- fast with Tony, and then into the Treasury to do more work on the speech. The rest of us are already in the office checking the proofs of the press releases. Alan Sugar has invited us to the Spurs v. Liverpool game which can kill two birds with one stone: we can relax for a few hours and the Sunday papers can have their pre-budget photo. Gordon sits in the directors' box. I sit round the corner with the punters where no one will notice me swearing at the ref and Christian Gross. The game was a 3-3 draw, although telling Alan Sugar that it was a great game is no consolation to him, as Spurs need the points to avoid relega- tion. Straight back to the Treasury to carry on the work on the speech. Eating now becomes a series of sandwiches and take- away pizzas.

15 MARCH. Gordon manages an hour in the gym before another long day in the Treasury. We can't believe he still has the energy. At lunch-time we leave with Sarah to go to Sue's youngest Ben's third birthday party. Gordon always goes to Sue's kids' parties, but we don't usually let the cameras in. But this time is different. It's astonishing the number of requests there are for pic- tures. The one they all seem to want is Gor- don walking hand in hand with Sarah through St James's Park and feeding the ducks. As this is something he has never done he was not going to start now, and since we had a long-standing invitation from Sue, that is what we were going to do. This will also provide the media with their Monday morning pictures. Some of the media were critical of the photo of Sarah, Gordon and Ben. That did not stop them all running it on the front page. You're damned if you do and damned if you don't. Last year, one national daily actually air- brushed out one of the apprentices from Rosyth from their front-page picture because they wanted Gordon pictured on his own! That's media spin-doctoring for you.

16 MARCH. One day to go! Gordon meets Martin Taylor to thank him for the work he has done on tax and benefit reform and informs him that he has decid- ed to adopt some of his recommendations. He has done a great job, and his proposals on National Insurance, already welcomed by business, are the most radical change for years. Gordon leaves us for a pre-bud- get audience with the Queen. Back to the Treasury to put the finishing touches to the speech. Last-minute changes keep us up till past midnight. Gordon goes off to tour the Treasury and meet the staff who will be copying and collating documents all night. We are all completely knack- ered.

17 MARCH. We all meet early for break- fast in the No. 10 flat with the Treasury team. The speech is done and the morning gives Gordon time to prepare the budget broadcast, as well as attend the traditional pre-budget Cabinet. He has also agreed to be interviewed by the BBC Newsround team. This proved much more difficult than a Paxman interview. 'What's 13 squared?' they asked. Fortunately, he didn't have to ask me and knew the answer straight off. So 'Chancellor can't add up' headlines were avoided. Later that night Paxman (typically) sneered at the Newsround team, saying that the Chancellor had done an interview with them but had refused News- night. The truth is chancellors don't nor- mally give interviews on budget day to any- one. But Newsround had asked and News- night had not. One-nil to Newsround! Off to the Commons office. Sarah had chosen Gordon's tie, a red Paul Smith — British made! Tony pops into the office to wish Gordon luck, and they even make a small change to the speech. Talk about last minute! Into the hothouse, only two min- utes over the hour planned. Total relief all round, then back into the office. But no drinks tonight. Tomorrow is a very busy day. We have postponed the post-budget party by 24 hours. Never celebrate too early!

The author is press secretary to the Chancellor of the Exchequer.