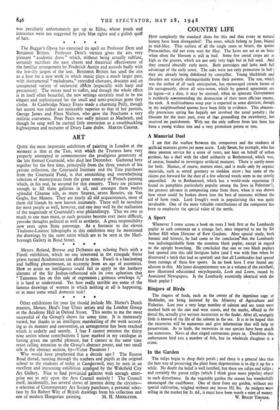 Ringers of Birds The ringers of birds, such as the

owner of the ingenious cage at Skokholm, are being imitated by the Ministry of Agriculture and Fisheries. Last year a very large number of salmon and sea trout were marked both on the east and west coasts, and the marks, affixed to the dorsal fin, actually give written instruction to the finder. After all, strangely little is known of the life of the salmon in the sea. It is to be hoped that the recoveries will be numerous and give information that will help to preservation. As to birds, the recoveries in one species have been much too numerous. News of shot ringed cormorants pours in. Doubtless this unfortunate bird eats a number of fish, but its wholesale slaughter is a crime.