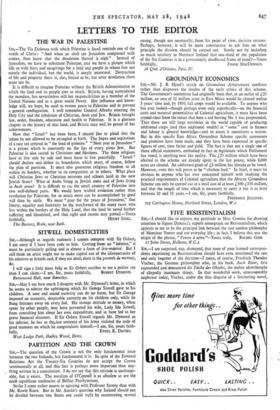 SIR,—Mr. J. B. Hynd's article on Groundnut Achievement confirms rather than disproves the doubts of the early critics of this scheme. The Government's contention had originally been that, at an outlay of £25 million, an area of 3+ million acies in East Africa would be cleared within 3 years' time and, by 1950, full crops would be available. To anyone who has ever looked—though perhaps even only superficially—on the financial costs and material potentialities of Colonial agriculture, it must have been crystal-clear from the outset that here a red herring No. 1 was propounded. That there are still large territories in the world capable of producing additional crops (and thus additional wealth) at " some " cost in finance and labour is general knowledge—and to assert it constitutes a truism. But in this specific East Africa Groundnut Scheme specific statements and promises have been made, and they have been expressed in specific figures of cost, time factor and yield. The fact is that not a single one of these official statements, embodied in fact in legislature which Parliament has voted, is anything near like reality. The £25 million which have been allotted to the scheme are already spent to the last penny, while 8,000 acres are cleared. An additional grant of £8 million has already to be voted. However, even this will prove to be "chicken feed." In brief, it must be obvious_ to anyone who has ever concerned himself with studying the practical requirements of Colonial agriculture that the African Groundnut Scheme can only be carried out at a total cost of at least L100-£150 million, and that the length of time which is necessary to carry it out is at least between 10 and 15 years.—! am, Sir, yours faithfully,