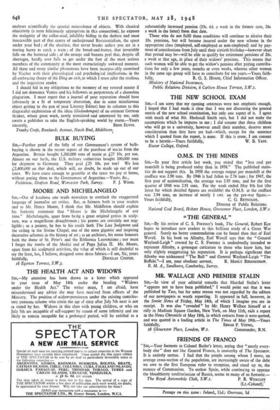 -Sta,—Your footnote to Colonel Butler's letter, saying that "nearly every- body else" does not like General Franco, is unworthy of The Spectator. It is entirely untrue. I find that the people among whom I move, an average cross-section of the population, are increasingly aware of the debt we owe to the first European ruler to recognise, and stand up to, the menace of Communism. To outlaw Spain, while continuing to appease the bloodthirsty totalitarianism of Russia, seems to many of us fantastic,— The Royal Automobile Club, S.W.r. P. R. WHALLEY