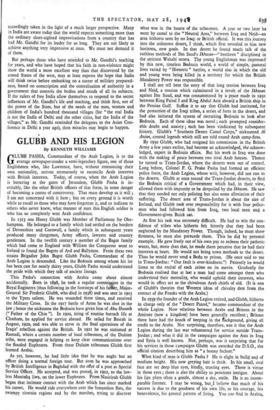 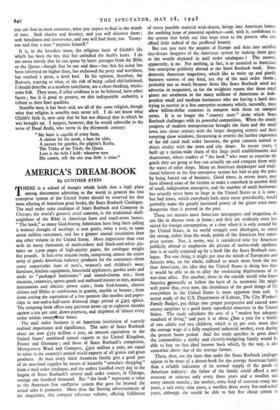 GLUBB AND HIS LEGION

GLUBB PASHA, Commandant of the Arab Legion, is to the average newspaper-reader a semi-legendary figure, one of those Englishmen who, like Lawrence, have, without renouncing their own nationality, striven strenuously to reconcile Arab interests with British interests. Today, of course, when the Arab Legion is battering at the gates of Jerusalem, Glubb Pasha is in- evitably, like the other British officers of that force, in some danger of becoming a centre of controversy. That must develop as it will ; I. am not concerned with it here ; but on every ground it is worth while to recall to those who may have forgotten it, and to indicate to others who never knew, what manner of man this English soldier is who has so completely won Arab confidence.

In 1313 one Henry Glubb was Member of Parliament for Oke- hampton. He belonged to a family which had settled on the borders of Devonshire and Cornwall, a family which in subsequent years produced many clergymen, Army officers, lawyers and country gentlemen. In the twelfth century a member of the Bagot family which had come to England with William the Conqueror went to Ireland to found the Bagots of Ard and Ballymoe. From these two strains Brigadier John Bagot Glubb Pasha, Commandant of the Arab Legion is descended. Like the Bedouin among whom his lot has been cast for nearly thirty years, Glubb Pasha would understand the pride with which they talk of ancient lineage.

This Pasha's connection with Arabia came about almost accidentally. Born in 1898, he took a regular commis4on in the Royal Engineers (thus following in the footsteps of his faffier, Major- General Sir Frederic Glubb, who died in 1938) and was sent in 1915 to the Ypres salient. He was wounded three times, and received the Military Cross. In the 1917 battle of Arras he was shot in the jaw ; hence the nickname the Bedouin have given him of Abu Hunaik (" Father of the Chin "). In 1920, tiring of routine barrack life at Chatham, he applied for service abroad. He sailed for Basrah in August, 1920, and was able to serve in the final operations of the Iraqis' rebellion against the British. In 1921 he was stationed at Ramadi, where a certain number of local tribesmen, of the Dulaim tribe, were engaged in helping to keep clear communications over the flooded Euphrates. From these Dulaim tribesmen Glubb first learned Arabic.

As yet, however, he had little idea that he was aught but an

officer doing a normal foreign tour. But soon he was approached by British Intelligence in Baghdad with the offer of a post as Special Service Officer. He accepted, and was posted, in 1922, to the law- less Muntafiq liwa, on the lower Euphrates. From Nasiriyah Glubb began that intimate contact with the Arab which has since marked his career. He would ride everywhere over the featureless flats, the swampy riverain regions and by the marshes, trying to discover what was in the hearts of the tribesmen. A year or two later he went by camel to the "Neutral Area," between Iraq and Nejd—an area hitherto seen by no Iraqi or British official. It was this journey into the unknown desert, I think, which first revealed to him new horizons, new goals. In that desert he found much talk of the

by this new, timeless Bedouin world, a world of simple, pastoral lives varied by " Homeric " battles, a world also in which the old and young were being killed in a territory for which the British Mandatory Power was responsible.

I shall not tell here the story of that long tension between Iraq and Nejd, a tension which culminated in a revolt of the Ikhwan against Ibn Saud, and was consummated by a peace made in 1930 between King Faisal I and King Abdul Aziz aboard a British ship in the Persian Gulf. Suffice it to say that Glubb had instituted, for the protection of the Iraqi tribes, a series of forts in the desert, and

had also initiated the system of recruiting Bedouin to look after Bedouin. Each of these ideas was novel ; each prompted consider-

By 1930 Glubb, who had resigned his commission in the British Army a few years earlier, had become an acknowledged, the acknow- ledged, expert in Bedouin affairs. But his work in Iraq was done with the making of peace between two rival Arab houses. Thence he turned to Trans-Jordan, where the deserts were out of control. Long before, Colonel F. G. Peake Pasha had formed an efficient police force, the Arab Legion, whose writ, however, did not run in the deserts. Glubb at once toured the Trans-Jordan deserts, to find the Bedouin critical of a Government which had, in their view, allowed them with impunity to be despoiled by the Ikhwan. He saw that they needed not only policing but also some alleviation of their suffering. The desert area of Trans-Jordan is about the size of Ireland, and Glubb took over responsibility for it with four police- men who had followed him from Iraq, two local men and a Government-given Buick car.

At first his task was extremely difficult. He had to win the con- fidence of tribes who hitherto felt bitterly that they had been neglected by the Mandatory Power. Though, indeed, he must show firmness, he must also persuade them. This he did by personal example. He gave freely out of his own pay to redeem their pathetic wants, but, more than that, he made them perceive that he had their interests at heart. He would not bring town methods to the desert. Thus he would never send a Bedu to prison. (He once said to me in Trans-Jordan: "Our fault is over-kindness.") Patiently he would listen to the recital of each crime on its merits. Gradually the Bedouin realised that at last a man had come amongst them who understood their mentality, who would uphold their interests, who would in effect act as the chivalrous Arab chiefs of old. (It is one of Glubb's theories that Western ideas of chivalry date from the contact of the Franks with the Arabs.) In 1939 the founder of the Arab Legion retired, and Glubb, hitherto in charge only of the "Desert Patrol," became commandant of the whole Legion. Now relations between Arabs and Britons in the Amirate (now a kingdom) have been generally excellent ; Britons there have had the knack of keeping in the gackground, giving all credit to the Arabs. Not surprising, therefore, was it that the Arab Legion during the last war volunteered for service outside Trans- Jordan ; and what it did in the campaigns against the Axis in Iraq and Syria is well known. Nor, perhaps, was it surprising that for his services in those campaigns Glubb was awarded the D.S.O., the official citation describing him as "a bonny fechter."

What kind of man is Glubb Pasha ? He is slight in build and of medium height. His now greying hair is thick. In his small, oval face are set deep blue eyes, kindly, trusting eyes. There is virtue in those eyes ; there is also the ability to penetrate intrigue. About his lips plays often a gentle, almost a shy, smile. He is an incom- parable listener. I may be wrong, but.I believe that much of his success is due to the goodness of his own life, to his courage, his benevolence, his general pattern of living. You can find in Arabia., you can find in most countries, what you expect to find in the minds of men. Seek charity and decency, and you will discover them ; seek bawdiness and irreverence, and you will find them, too. Tenny- son said that a man "imputes himself."

It is, in the broadest sense, the religious basis of Glubb's life which has been the key that has unlocked the Arab's heart. I do not mean merely that he can quote by heart passages from the Bible or the Quran—though that he can and does—but that his mind has been informed on higher lines, has eschewed the petty and worthless, has reached a poise, a level keel. In his opinion, therefore, the Bedouin, reacting to what, at the risk of being called old-fashioned, I should describe as a modern saintliness, are a clean-thinking, whole- some folk. They must, if other evidence is to be believed, have other facets ; but it is good to possess, on this indisputable authority, a tribute to their finer qualities.

Sensible men, it has been said, are all of the same religion, though what that religion is sensible men never tell. I do not know what Glubb's faith is, save only that he has not abjured that in which he was brought up. I suspect, however, that he would subscribe to the verse of Ibnul Arabi, who wrote in the thirteenth century: "My heart is capable of every form, A cloister for the monk, a fane for idols, A pasture for gazelles, the pilgrim's Kaaba, The Tables of the Torah, the Quran.

Love is the faith I hold: wherever turn His camels, still the one true faith is mine."