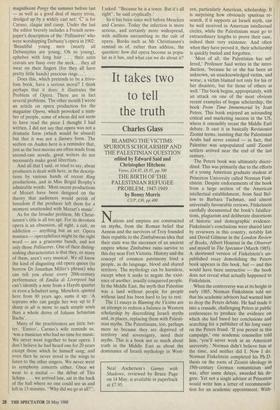 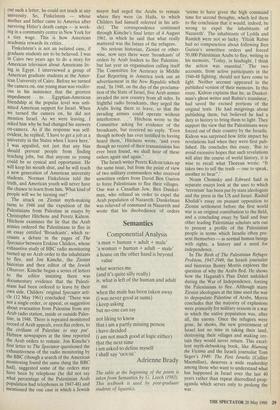 It takes two to tell the truth

Nations and empires are constructed on myths, from the Roman belief that Aeneas and the survivors of Troy founded their republic to the Zimbabwean idea that their state was the successor of an ancient empire whose Zimbabwe ruins survive to this day near Fort Victoria. History and the concept of common patrimony bind a people, as do language, blood and shared territory. The mythology can be harmless, except when it seeks to negate the exist- ence of another, usually conquered people. In the Middle East, the myth that Palestine was a land without people for people without land has been hard to lay to rest.

The 11 essays in Blaming the Victims are an attempt to redress a balance in Western scholarship by discrediting Israeli myths and, in places, replacing them with Palesti- nian myths. The Palestinians, too, perhaps more so because they are deprived of territory and sovereignty, need their myths. This is a book not so much about truth in the Middle East as about the dominance of Israeli mythology in West- em, particularly American, scholarship. It is surprising how obviously spurious re- search, if it supports an Israeli myth, can be well received in American intellectual circles, while the Palestinians must go to extraordinary lengths to prove their case, indeed their very existence. And often when they have proved it, their scholarship is quickly buried and forgotten.

`Most of all, the Palestinian has suf- fered,' Professor Said writes in the intro- duction, 'because he or she has been an unknown, an unacknowledged victim, and worse, a victim blamed not only for his or her disasters, but for those of others as well.' The book begins, appropriately, with an attack on one of the most obvious recent examples of bogus scholarship, the book From Time Immemorial by Joan Peters. This book enjoyed an astounding critical and marketing success in the US, where it ostensibly recast the Middle East debate. It cast it in basically Revisionist Zionist terms, insisting that the Palestinian Arabs had never existed — in fact, that Palestine was unpopulated until Zionist settlers arrived near the end of the last century.

The Peters book was ultimately discre- dited. This was primarily due to the efforts of a young American graduate student at Princeton University called Norman Fink- elstein. Despite endorsements of the book from a large section of the American intellectual establishment, from Saul Bel- low to Barbara Tuchman, and almost universally favourable reviews, Finkelstein carefully documented the book's falsifica- tions, plagiarism and deliberate distortions of historic and demographic evidence. Finkelstein's conclusions were shared later by reviewers in this country, notably Ian and David Gilmour in the London Review of Books, Albert Hourani in the Observer and myself in The Spectator (March 1985). A shortened version of Finkelstein's un- published essay demolishing the Peters book appears in this book, but — and this would have been instructive — the book does not reveal what actually happened to Finkelstein.

When the controversy was at its height in early 1985, Norman Finkelstein told me that his academic advisors had warned him to drop the Peters debate. He had made it into a crusade, challenging Peters at public conferences to produce the evidence on which she had based her conclusions and searching for a publisher of his long essay on the Peters fraud. 'If you persist in this campaign,' one academic counsellor told him, 'you'll never work in an American university.' Norman didn't believe him at the time, and neither did I. Now I do. Norman Finkelstein completed his Ph.D. thesis on the roots of Zionist ideology in 19th-century German romanticism and was, after some delays, awarded his de- gree. Yet not a single advisor at Princeton would write him a letter of recommenda- tion for an academic appointment. With- out such a letter, he could not teach at any university. So, Finkelstein — whose mother and father came to America after surviving Hitler's death camps — is work- ing in a community centre in New York for a tiny wage. This is how American academia rewards its critics.

Finkelstein's is not an isolated case, if graduate students are to be believed. I was in Cairo two years ago to do a story for American television about Americans liv- ing in Egypt. I interviewed a group of American graduate students at the Amer- ican University of Cairo. Before we turned the camera on, one young man was vocifer- ous in his insistence that the greatest impediment to Egyptian-American friendship at the popular level was unli- mited American support for Israel. When we turned the camera on, he did not mention Israel. As we were leaving, I asked him why he had changed his answers on-camera. As if the response was self- evident, he replied, `I have to get a job at a university in the States when I leave here.' I was appalled, not just that any bias should prevent people from finding teaching jobs, but that anyone so young could be so cynical and opportunist. He will keep his mouth shut, and he will teach a new generation of American university students. Norman Finkelstein told the truth, and American youth will never have the chance to learn from him. What kind of people will we be turning out?

The attack on Zionist myth-making turns to 1948 and the expulsion of the Palestinians from Palestine in essays by Christopher Hitchens and Peretz Kidron. Hitchens examines the lie that the Arab armies ordered the Palestinians to flee in an essay entitled 'Broadcasts', which re- counts a debate in the pages of The Spectator between Erskine Childers, whose exhaustive study of BBC radio monitoring turned up no Arab order to the inhabitants to flee, and Jon Kimche, the Zionist historian and then editor of the Jewish Observer. Kimche began a series of letters to the editor insisting there was documentary evidence that the Palesti- nians had been ordered to leave by their own side. Childers' original Spectator arti- cle (12 May 1961) concluded: `There was not a single order, or appeal, or suggestion about evacuation from Palestine from any Arab radio station, inside or outside Pales- tine, in 1948. There is repeated monitored record of Arab appeals, even flat orders, to the civilians of Palestine to stay put'. Hebrew newspapers at the time reported the Arab orders to remain. Jon Kimche's first letter to The Spectator questioned the exhaustiveness of the radio monitoring by the BBC (though a search of the American monitoring found the same thing the BBC had), suggested some of the orders may have been by telephone (he did not say what percentage of the Palestinian Arab population had telephones in 1947-48) and mentioned the one case in which a Jewish mayor had urged the Arabs to remain where they were (in Haifa, to which Childers had himself referred in his arti- cle). The correspondence continued through Kimche's final letter of 4 August 1961, in which he said that what really mattered was the future of the refugees.

No serious historian, Zionist or other- wise, now says there were 'broadcasts' of orders by Arab leaders to flee Palestine, but last year an organisation calling itself The Committee for Accuracy in Middle East Reporting in America took out an advertisement in the New Republic which read, `In 1948, on the day of the proclama- tion of the State of Israel, five Arab armies invaded the new country from all sides. In frightful radio broadcasts, they urged the Arabs living there to leave, so that the invading armies could operate without interference. . . Hitchens wrote to the Committee asking for evidence of the broadcasts, but received no reply. 'Even though nobody has ever testified to having heard them,' Hitchens wrote, `and even though no record of their transmissions has ever been found, we shall hear of these orders again and again.'

The Israeli writer Peretz Kidron takes up the same issue, but from the point of view of two military commanders who received unwritten orders from David Ben Gurion to force Palestinians to flee their villages. One was a Canadian Jew, Ben Dunkel- man, who refused an order to expel the Arab population of Nazareth. Dunkelman was relieved of command in Nazareth and wrote that his disobedience of orders `seems to have given the high command time for second thoughts, which led them to the conclusion that it would, indeed, be wrong to expel the inhabitants of Nazareth'. The inhabitants of Lydda and Ramleh were not so lucky. Yitzak Rabin had no compunction about following Ben Gurion's unwritten orders and forced 50,000 Palestinian Arabs to flee, writing in his memoirs, `Today, in hindsight, I think the action was essential.' The two accounts, from active participants in the 1946-48 fighting, should not have come to light. Neither account appeared in the published version of their memoirs. In this essay, Kidron explains that he, as Dunkel- man's ghost writer and Rabin's translator, had saved the excised portions of the original texts. He had misgivings about publishing them, but believed he had a duty to history to bring them to light. They support the view that the Palestinians were forced out of their country by the Israelis. Kidron was surprised how little impact his revelations had when they were first pub- lished. He concludes this essay, 'But to avoid excessive hopes that such revelations will alter the course of world history, it is wise to recall what Thoreau wrote: "It takes two to tell the truth — one to speak, another to hear".'

Noam Chomsky and Edward Said in separate essays look at the uses to which `terrorism' has been put by state ideologists and the press in the US and Israel. Rashid Khalidi's essay on peasant opposition to Zionist settlement before the first world war is an original contribution to the field, and a concluding essay by Said and four other leading Palestinian scholars sets out to present a profile of the Palestinian people in terms which Israelis often pre- sent themselves — as normal human beings with rights, a history and a need for independence. In The Birth of The Palestinian Refugee Problem, 1947-1949, the Israeli journalist and historian Benny Morris explores the question of why the Arabs fled. He shows how the Haganah's Plan Dalet unfolded during the War of Independence, forcing the Palestinians to flee. Although many Zionist ideologues at the time used the war to depopulate Palestine of Arabs, Morris concludes that the majority of explusions were primarily for military reasons in a war in which the native population was, after all, the enemy. Once the refugees were gone, he shows, the new government of Israel lost no time in taking their land, destroying their villages and making cer- tain they would never return. This excel- lent myth-debunking book, like Blaming the Victims and the Israeli journalist Tom Segev's 1949: The First Israelis (Collier Macmillan), deserves a wide readership among those who want to understand what has happened in Israel over the last 40 years rather than repeat discredited prop- aganda which serves only to prolong the war.