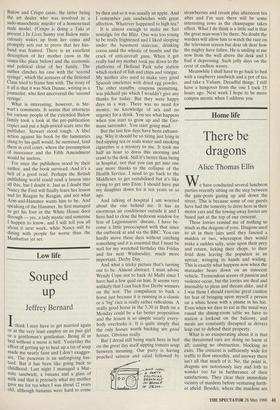 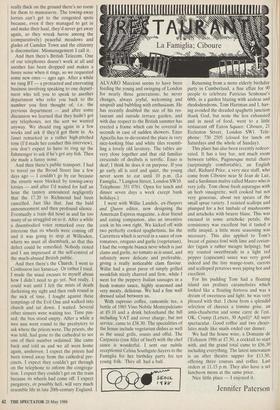 We have conducted several luncheon parties recently sitting on the step between the gate-posts gazing up and down the street. This is because some of our guests have had the temerity to drive here in their motor cars and the towing-away lorries are based just at the top of our crescent.

These lorries remind me of nothing so much as the dragons of yore. Dragons used to sit in their lairs until they fancied a maiden or two, whereupon they would make a sudden sally, seize upon their prey and return, licking their chops, to their fetid dens leaving the populace in an uproar, wringing its hands and wailing. This is exactly what happens now when the marauder bears down on an innocent vehicle. Tremendous scenes of passion and violence occur, but the lorries are deaf and insensible to pleas and threats alike, and if I was them I should exercise great caution for fear of bringing upon myself a person on a white horse with a plume in his hat. Even when we dare to eat in the usual way round the dining-room table we have to station a lookout on the balcony, and meals are constantly disrupted as drivers leap out to defend their property.

What is so exasperating about it is that the threatened cars are doing no harm at all; causing no obstruction, blocking no exits. The crescent is sufficiently wide for traffic to flow smoothly, and anyway there isn't all that much of it. No, the point is, dragons are notoriously lazy and loth to wander too far in furtherance of their satisfactions. They clear their immediate vicinity of maidens before venturing furth- er afield. Besides, where the maidens are really thick on the ground there's no room for them to manoeuvre. The towing-away lorries can't get to the congested spots because, even if they managed to get in and make their haul, they'd never get away again, so they wreak havoc among the (comparatively) peaceful meadows and glades of Camden Town and the citizenry is disconsolate. Mismanagement I call it.

And then there's British Telecom. One of our telephones doesn't work at all and another has been dropped and makes a funny noise when it rings, so we requested some new ones — ages ago. After a while we rang BT — a protracted and enervating business involving speaking to one depart- ment who tell you to speak to another department who refer you back to the number you first thought of, i.e. the previous department — and after some discussion we learned that they hadn't got any telephones, not the sort we wanted anyway. We should ring again in a few weeks and ask if they'd got them in. As Janet remarked in a rather high-pitched tone (I'd made her conduct this interview), you don't expect to have to ring up the fishmonger to ask if he's got any fish. Then she made a funny noise.

And then there's public transport. I had to travel on the Broad Street line a few days ago — I couldn't go by car because the streets were blocked by towing-away lorries — and after I'd waited for half an hour the tannoy announced negligently that the 17.20 to Richmond had been cancelled. Just like that. Just the bald announcement and then profound silence. Eventually a train did bowl in and far too many of us struggled on to it. After a while a disembodied voice remarked over the intercom that its wheels were coming off and it was going to stop at Willesden, where we must all disembark, so that this defect could be remedied. Nobody rioted and I am impressed at the self-control of the much-abused British public.

And then there's the Church. I went to Confession last Saturday. Or rather I tried. I made the usual excuses to myself about how I didn't need to go yet. Not really. I could wait until I felt the mists of death darkening my sight and then rush round in the nick of time. I fought against these temptings of the Evil One and walked into church and sat down. I waited. Several other sinners were waiting too. Time pas- sed; the box stood empty. After a while a wee nun went round to the presbytery to ask where the priests were. The priests, she was told, had gone to the cathedral to see one of their number ordained. She came back and told us and we all went home again, unshriven. I expect the priests had been towed away from the cathedral pre- cincts. I expect they couldn't get through on the telephone to inform the congrega- tion. I expect they couldn't get on the train because its wheels had come off. I expect purgatory, or possibly hell, will very much resemble life in late 20th-century England.