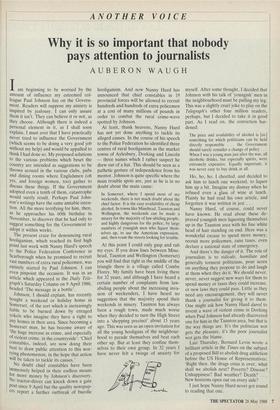 Why it is so important that nobody pays attention to journalists

Iam beginning to be worried by the amount of influence my esteemed col- league Paul Johnson has on the Govern- ment. Readers will suppose my anxiety is inspired by jealousy. I can only assure them it isn't. They can believe it or not, as they choose. Although there is indeed a personal element in it, as I shall soon explain, I must aver that I have practically never tried to influence the Government (which seems to be doing a very good job without my help) and would be appalled to think I had done so. My proposed solutions to the various problems which beset the country are intended as suggestions to be thrown around in the various clubs, pubs and dining rooms where Englishmen (oh Yes, and foreign women, too) gather to discuss these things. If the Government adopted even a tenth of them, catastrophe would surely result. Perhaps Paul John- son's writings have the same amiable inten- tion. All the more terrifying for him, then, as he approaches his 60th birthday in November, to discover that he had only to suggest something for the Government to adopt it within weeks.

The present craze for denouncing rural hooliganism, which reached its first high point last week with Nanny Hurd's speech to the Police Federation Conference in Scarborough when he promised to recruit vast numbers of extra rural policemen, was entirely started by Paul Johnson. I can even pinpoint the occasion. It was in an article which appeared in the Daily Tele- graph's Saturday Column on 9 April 1988, headed 'The message in a bottle'. Johnson, I should explain, has recently bought a weekend or holiday home in Somerset, of the sort which is increasingly liable to be burned down by enraged yokels who imagine they have a right to any homes in their area. Since becoming a Somerset man, he has become aware of the huge increase in crime, and especially of violent crime, in the countryside': 'Chief constables, indeed, are now doing their best to draw public attention to this wor- rying phenomenon, in the hope that action will be taken to tackle its causes.'

No doubt chief constables have been immensely helped in their endless moans for more money by Johnson's discovery. No tractor-driver can knock down a gate post since 9 April but the quality newspap- ers report a further outbreak of bucolic hooliganism. And now Nanny Hurd has announced that chief constables in 19 provincial forces will be allowed to recruit hundreds and hundreds of extra policemen at a cost of many millions of pounds in order to combat the rural crime-wave spotted by Johnson.

At least, thank heavens, Nanny Hurd has not yet done anything to tackle its alleged causes. In the course of his speech to the Police Federation he identified three centres of rural hooliganism as the market towns of Aylesbury, Dorking and Lincoln — three names which I rather suspect he drew out of a hat. This should be seen as a pathetic gesture of independence from his mentor. Johnson is quite specific where the main trouble spots are, just as he is in no doubt about the main cause:

In Somerset, where I spend most of my weekends, there is not much doubt about the chief factor. It is the easy availability of cheap alcohol. In towns like Minehead, Taunton and Wellington, the weekends can be made a misery for the majority of law-abiding people, and highly dangerous for the police, by large numbers of youngish men who liquor them- selves up, to use the American expression, and, then roam the streets looking for trouble.

At this point I could only gasp and rub my eyes. If you draw lines between Mine- head, Taunton and Wellington (Somerset) you will find that right in the middle of the triangle there is a village called Combe Florey. My family have been living there for 32 years, and although I have heard a certain number of complaints from law- abiding people about the increasing inva- sion of weekenders, I have heard no suggestion that the majority spend their weekends in misery. Taunton has always been a rough town, made much worse when they decided to turn the High Street into a 'shopping precinct' about 15 years ago. This was seen as an open invitation for all the young hooligans of the neighbour- hood to parade themselves and beat each other up. But at least they confine them- selves to their own group. In 32 years I have never felt a twinge of anxiety for

myself. After some thought, I decided that Johnson with his talk of 'youngish' men in the neighbourhood must be pulling my leg. This was a slightly cruel joke to play on the Telegraph's other four million readers, perhaps, but I decided to take it in good part. As I read on, the conviction har- dened: The price and availability of alcohol is [sic] something for which politicians can be held directly responsible . . . the Government should surely consider a change of policy . . When I was a young man just after the war, all alcoholic drinks, but especially spirits, were extremely expensive. Equally important, it was never easy to buy drink at all.

Ho, ho, ho, I chortled, and decided to ask him to lunch one weekend, to liquor him up a bit. Imagine my dismay when he refused even a glass of wine at lunch. Plainly he had read his own article, and forgotten it was written in jest . . .

Nanny Hurd, of course, could never have known. He read about these de- praved youngish men liquoring themselves up in the Taunton area with his fine white head of hair standing on end. Here was a wonderful excuse to spend more money, recruit more policemen, raise taxes, even declare a national state of emergency.

And there's the danger of it. The role of journalists is to ridicule, humiliate and generally torment politicians, pour scorn on anything they propose to do and laugh at them when they do it. We should never, never, never suggest new ways for them to spend money or taxes they could increase, or new laws they could pass. Little as they need any encouragement, they will never thank a journalist for giving it to them. One might ask how Nanny Hurd dared to invent a wave of violent crime in Dorking when Paul Johnson had already discovered one for him in the Taunton area, but that is the way things are. It's the politician wot gets the pleasure, it's the poor journalist wot gets the blame.

Last Thursday, Bernard Levin wrote a brilliant article in the Times on the subject of a proposed Bill to abolish drug addiction before the US House of Representatives: `Right then, the drugs crisis is over, what shall we abolish next? Poverty? Disease? Unhappiness? Bad weather? Death? . . . New horizons open out on every side?

I just hope Nanny Hurd never got round to reading that one.