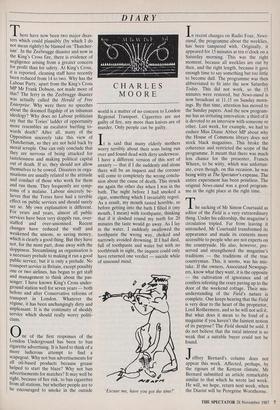 CHARLES MOORE There have now been two major disas- ters which could plausibly (by which I do not mean rightly) be blamed on 'Thatcher- ism'. In the Zeebrugge disaster and now in the King's Cross fire, there is evidence of negligence arising from a greater concern for profit than for safety. At King's Cross, it is reported, cleaning staff have recently been reduced from 14 to two. Why has the Labour Party, apart from the King's Cross MP Mr Frank Dobson, not made more of this? The ferry in the Zeebrugge disaster was actually called the Herald of Free Enterprise. Why were there no speeches about the doomed flagship of an inhuman ideology? Why does no Labour politician say that the Tories' ladder of opportunity more resembles an escalator hurtling to- wards death? After all, many of the Opposition sincerely take this view of Thatcherism, so they are not held back by moral scruple. One can only conclude that they are nervous of being attacked for tastelessness and making political capital out of death. If so, they should not allow themselves to be cowed. Disasters in orga- nisations are usually related to the attitude and conduct of those who work for them and run them. They frequently are symp- toms of a malaise. Labour sincerely be- heves that the Tories have had a terrible effect on public services and should surely say so. My own explanation is different. For years and years, almost all public services have been very sloppily run, over- staffed and over-unionised. Recent changes have reduced the staff and weakened the unions, so saving money, which is clearly a good thing. But they have not, for the most part, done away with the sloppiness. Streamlining an organisation is a necessary prelude to making it run a good public service, but it is only a prelude. No transport service in Britain, except possibly one or two airlines, has begun to get staff and management to think about the pas- senger. I have known King's Cross under- ground station well for seven years — both before and after Conservative reforms of transport in London. Whatever the regime, it has been unchangingly dirty and unpleasant. It is the continuity of shoddy service which should really worry politi- cians.

0 ne of the first responses of the London Underground has been to ban cigarette advertising. It is hard to think of a more ludicrous attempt to find a scapegoat. Why not ban advertisements for all oil-based products because grease helped to start the blaze? Why not ban advertisements for matches? It may well be nght, because of fire risk, to ban cigarettes from all stations, but whether people are to be encouraged to smoke in the outside world is a matter of no concern to London Regional Transport. Cigarettes are not guilty of fire, any more than knives are of murder. Only people can be guilty.

It is said that many elderly mothers worry terribly about their sons being run over and found dead with dirty underwear. I have a different version of this sort of anxiety — that if I die suddenly and alone there will be an inquest and the coroner will come to completely the wrong conclu- sion about the cause of death. This struck me again the other day when I was in the bath. The night before I had smoked a cigar, something which I invariably regret. As a result, my mouth tasted horrible, so before getting into the bath I filled it (my mouth, I mean) with toothpaste, thinking that if it sloshed round my teeth for 20 minutes the taste would go away. As I lay in the water, I suddenly swallowed the toothpaste the wrong way, choked and narrowly avoided drowning. If I had died, full of toothpaste and water but with no toothbrush in sight, the inquest could only have returned one verdict — suicide while of unsound mind.

'Excuse me, have you got the time?' In recent changes on Radio Four, News- stand, the programme about the weeklies, has been tampered with. Originally, it appeared for 15 minutes at ten o'clock on a Saturday morning. This was the right moment, because all weeklies are out by then, and the right length, because it gave enough time to say something but too little to become dull. The programme was then abbreviated to fit into the new Saturday Today. This did not work, so the 15 minutes were restored, but News-stand is now broadcast at 11.15 on Sunday morn- ings. By that time, attention has moved to the Sunday papers. And the new program- me has an irritating innovation: a third of it is devoted to an interview with someone or other. Last week, for example, we had to endure Miss Diane Abbot MP about why the House of Commons library does not stock black magazines. This broke the coherence and restricted the scope of the programme. It meant that there was much less chance for the presenter, Francis Wheen, to be witty, which was unfortun- ate, even though, on this occasion, he was being witty at The Spectator's expense. The entire experiment has been pointless. The original News-stand was a good program- me in the right place at the right time.

The sacking of Mr Simon Courtauld as editor of the Field is a very extraordinary thing. Under his editorship, the magazine's circulation tripled. Far from leaving it untouched, Mr Courtauld transformed its appearance and made its contents more accessible to people who are not experts on the countryside. He also, however, pre- served and strengthened the magazine's traditions — the traditions of the true countryman. This, it seems, was his mis- take. If the owners, Associated Newspap- ers, know what they want, it is the opposite — the cultivation of ignorance and of conifers infesting the crazy paving up to the door of the weekend cottage. Their mis- understanding of the Field's nature is complete. One keeps hearing that the Field is very dear to the heart of the proprietor, Lord Rothermere, and so he will not sell it. But what does it mean to be fond of a magazine if you haven't the faintest notion of its purpose? The Field should be sold. I do not believe that the rural interest is so weak that a suitable buyer could not be found.

Jeffrey Bernard's column does not appear this week. Affected, perhaps, by the rigours of the Kenyan climate, Mr Bernard submitted an article remarkably similar to that which he wrote last week. He will, we hope, return next week, when the Diarist will be Peregrine Worsthome.